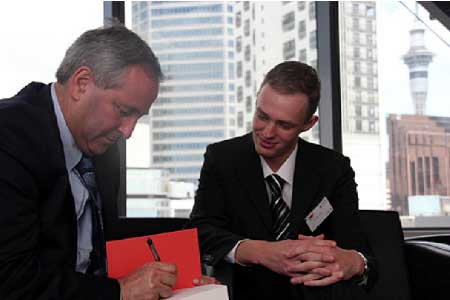 Future U winner Stephen Lines gets a copy of Megachange  – The World in 2050 signed by Economist editor Daniel Franklin.


Watch the interview with Dr Franklin. 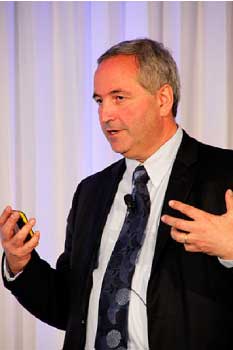 New Zealand is “surprisingly well positioned for 2050”, according to the executive editor of The Economist Daniel Franklin.

During the keynote address at the new New Zealand Forum, an event organised by Massey University and Westpac, Dr Franklin outlined some of the mega-trends shaping the future of the world and the implications and opportunities for New Zealand.

He identified population growth as one of the key drivers of change, as well as the growth of Asia’s economy.

“New Zealand is surprisingly well positioned for the world in 2050 for a number of reasons. It’s close to Asia where a lot of the economic action is going to be, and it has a relatively big agricultural sector in a world that will need to feed nine billion people,” Dr Franklin says.

“The implications are even more dramatic than the actual population numbers suggest. The world’s population is not only increasing but also getting richer… so we will need to produce something like 70 per cent more food.”

Dr Franklin believes New Zealand’s agri-food expertise means it should be in a position to not only produce valuable food products, but also export its agri-food technology so other countries can increase their own food output.

“There maybe some complications due to climate change,” he acknowledges, “but New Zealand has a relatively enviable environment so it also raises the issues of managing that great heritage well.”

The fact that English is one of New Zealand’s official languages will also be to its advantage, Franklin says.

“English is probably going to continue to be the main language spoken, despite the rise of China, and New Zealand’s links through the Commonwealth to Africa will be important. There is going to be tremendous population growth in Africa and it will be a very fast growing part of the world’s economy.”

Dr Franklin, who describes himself as “relatively optimistic” about the future, says with good management and the right policies, there is no reason that New Zealand will not come through the current period of wrenching change in good shape.

“My main piece of advice for NZ is to stay open – to trade, to other people and cultures, and to ideas. There’s always the temptation when things are changing very fast around you to close up. New Zealand needs to compete in the world of ideas and the more open New Zealand is, the more likely it is going to be able to take advantage of the opportunities.”

Massey University Vice-Chancellor Steve Maharey says the University organised the forum with Westpac to create a stronger focus on New Zealand’s future. He believes the University is already responding to the future needs of New Zealand and the world, particularly in terms of agri-food research and education.

“New Zealand can’t feed nine billion people, but we can provide some of the thinking and knowledge it will take to do this, at the same time moving our products up the value chain.”

Westpac's managing director private, wealth and insurance Simon Power says: "Thinking long term is exactly what we as a country need to be doing, and having someone of Daniel Franklin's stature to assist with leading that discussion is an extraordinary opportunity. Westpac is proud to back any forum that gets us focused on what those opportunities may be."

A video of the forum presentations and Q&A session can be viewed at: https://www.massey.ac.nz/massey/about-massey/events/new-nz-forum/en/watch-live.cfm,

Mega-trends expert to speak at forum on the future