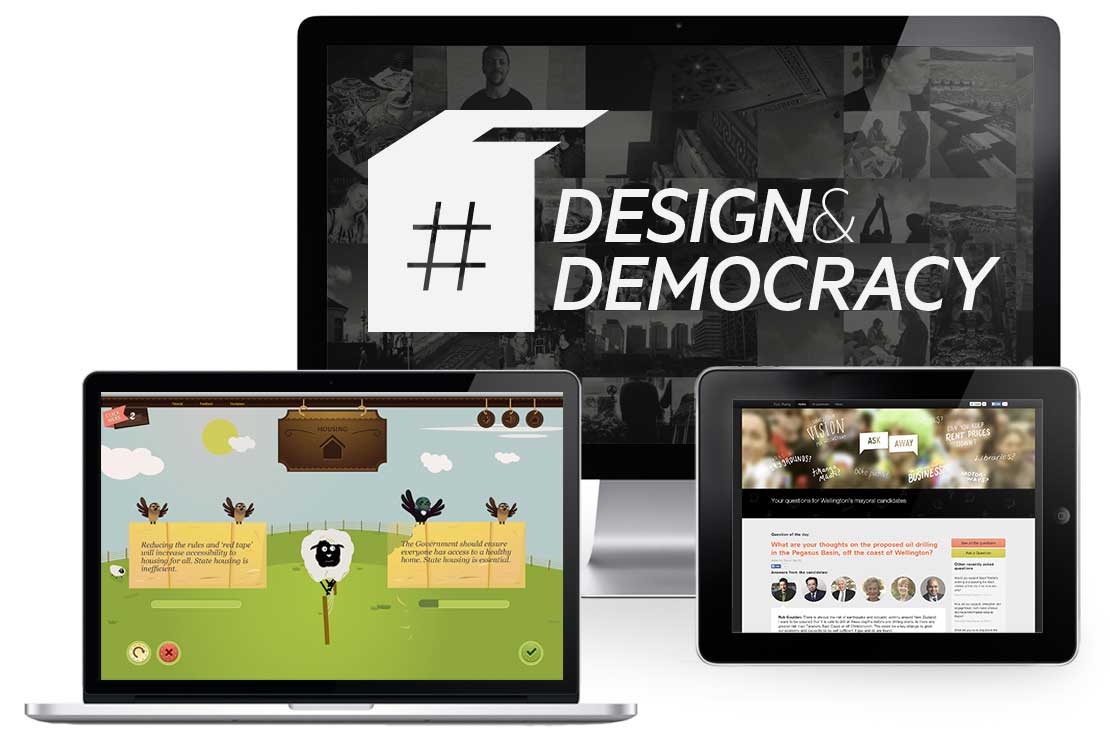 The Design & Democracy Project has two initiatives – On the Fence and Ask Away.

By Kieran Stowers and Meg Howie

Massey University has just released a survey of nearly 300 students showing that only 8 per cent knew the date of the coming election. We’re not surprised.

Imagine being told: “You should go to this party I’m having; it’s your duty. Nobody your age will be there and you’re not going to understand what we’re saying.” This invitation does not appeal, even if it’s the Orange Guy himself asking. Last election, nearly half of eligible young people said “not for me thanks”, and we don’t blame them.

Democratic representation is important, but we have to be able to relate to it. Otherwise, our subconscious filters send election information straight to the spam folder.

But what is it that gives young people the message that politics and elections are not for us?

We’ve all heard the sweeping generalisations about young people with their selective hearing and short attention spans – but could it be that we are not hearing anything worth listening to? In this age of internet transparency, young people easily spot phonies generating marketing and political spin.

Talk show host John Oliver recently remarked, “if you want to do something evil, put it inside something really boring”. We wouldn’t go so far as to suggest that there’s a conspiracy behind this fall in participation (though some would – à la Russell Brand) but it does appear that the political conversation in New Zealand is an insider’s one.

The first stares us in the face on the front page of every newspaper. The median age of MPs in the current Parliament is 51 years. Two-thirds are male. These men have been around longer than colour TV in New Zealand. If young people can’t see themselves represented in the system, they won’t engage with it. As humans, we’re constantly asking: ‘Do I belong here?’ For most young people, when listening to the voices that dominate political discussion, the resounding answer is no.

The second is language. Recently, we asked the leader of a hip hop dance crew from Lower Hutt “are you interested in arts, culture and heritage?” to which he responded “that’s not stuff I’m into”. The words we choose go a long way to include or exclude people. People switch off when they hear jargon; we need to translate partisan philosophical and ethical values into concepts that a tech-savvy younger generation can easily understand.

But how do you change a system as fossilised as the piece of toast that’s been down the side of your stove for years?

As young designers, this poses a pretty juicy challenge, so we’re developing two web tools through Massey’s Design and Democracy Project to help young people like us get their heads around what matters in this year’s election.

Ask Away (askaway.co.nz) is a question and answer website where young people can ask the parties questions about the things they care about, and vote for the questions they want answered. They get to engage on their own terms, and if they want to ask what Game of Thrones character the candidates would be, we’re not going to stop them (but please don’t). We ran a local version for the Wellington Mayoral campaign last year.

The On The Fence (onthefence.co.nz) website acts as a visual questionnaire, guiding inexperienced voters to find which political parties align closest to their values. Find a policy area, feed the sheep as much as you agree with the two ideologically opposed statements and launch yourself off the fence! The site was originally launched in 2011, just six days before the election and proved popular indeed, attracting over 30,000 individual visitors from all over the world.

Ask Away and On The Fence are two examples of the initiatives beginning to creatively empower young people who have been internalising a really complicated situation in their head. There is an obvious need for tools that enable young people to take part in important things that affect them. It’s time to talk to digital natives in our own language and make politics fun.

There is a misconception that because young people are not present in traditional civic activities such as voting, we are lazy. But Occupy Wall Street, ethical boycotts of companies, sharing links on Twitter and petition signing are all signs of participation. It’s not called doing ‘nothing’, or even ‘nothing much’. Many of us are committed to doing something, something much more.

Meg Howie and Kieran Stowers are part of the Design and Democracy Project at Massey University College of Creative Arts, Wellington. Tweet them on @askawaynz (Meg) and @nzonthefence (Kieran). Election 2014 versions of Ask Away and On The Fence go live early August.

Winter is coming, and so is an election
Opinion: How inclusive is our political system?
Design & Democracy Project