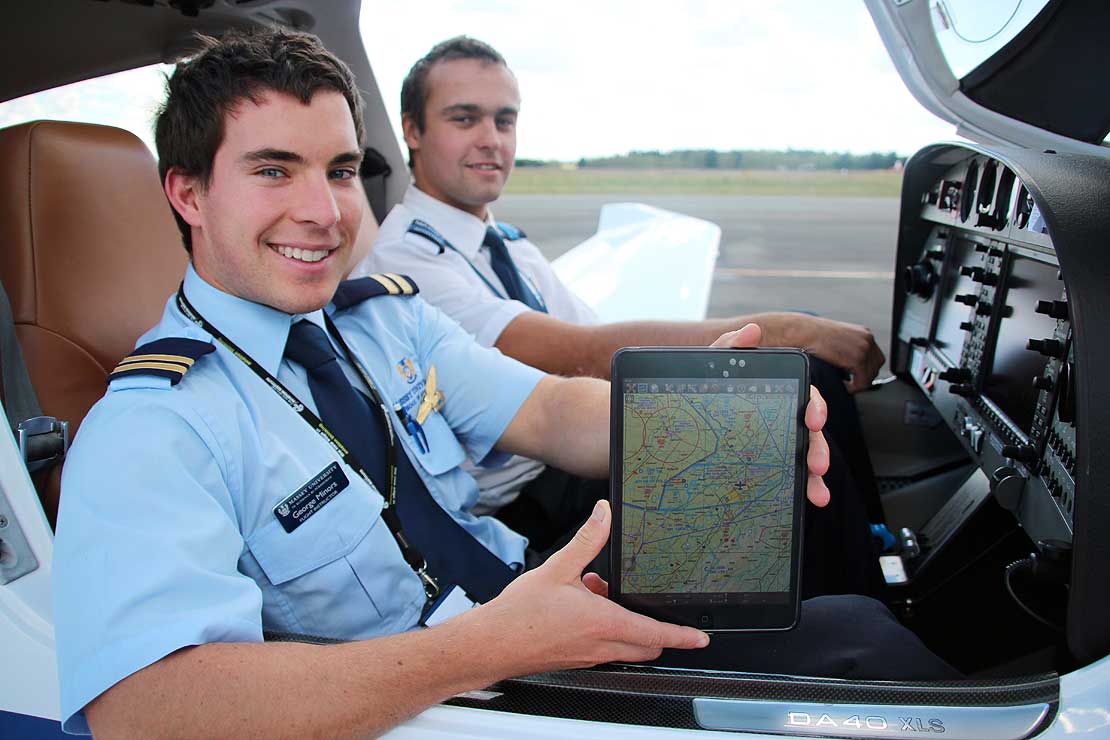 Massey University’s School of Aviation is trialling the use of iPads as an “electronic flight bag” on board its aircraft. The trial has consent from the Civil Aviation Authority (CAA) and is the first of its kind to be undertaken by a flight-training centre in New Zealand.

“In modern commercial aircraft the advanced technology cockpits are fitted with an electronic flight bag that provides easy access to the charts and manuals that pilots are required to carry on board,” says School of Aviation chief executive Ashok Poduval.

“In most aircraft, though, pilots have a carry-on flight bag that contains paper-based reference materials – manuals, booklets of technical information, maps and charts, etc. With this proof of concept trial we are trying to emulate the electronic flight bags of the commercial airlines, but in a practical and cost-effective way.”

The two-month trial has only just begun, but the flight instructors using the iPads are already discovering some key advantages.

“There’s some massive advantages to having all the paperwork in an electronic format,” says flight instructor and trial coordinator George Minors. “For example the AIP [Aeronautical Information Publication] is available as a free app for the iPad. When you download it, it streams from the website so it’s always the latest version and you can update it with the press of a button.

“The paper version of the document comes in a thick A5 folder and needs updating every month or so. This is a really laborious task for both staff and students – it can take one or two hours to go through the folder finding and replacing all the updated pages.”

Savings in paper, time and subscription costs are already becoming apparent, but it’s the in-flight functionality of the tablets that is the focus of the trial.

For the next six weeks Massey’s flight instructors will use an iPad or an iPad Mini on all their flights, with hard copy reference documents as a back-up. So far, Mr Minors says, he hasn’t had to revert to using his paper-based materials.

After each flight the instructors fill out feedback forms and, at the end of the trial period, the information will be collated and assessed by the School of Aviation’s management review team. If the trial is deemed successful and financially viable, the school will seek permission from the CAA to introduce iPads as a replacement for paper-based media.

Mr Minors says he has found the tablets relatively easy to use, with the ability to zoom in and scroll around maps particularly useful. At this stage he favours the iPad Mini’s smaller size, but there have been a few isolated cases of apps freezing on the Mini.

“We think this is due to a minor glitch with the app so we’re providing feedback to the developers too so they can fix the problem with their next update.”

Mr Minors says the development of new and more sophisticated apps could make iPads even more attractive in the future.

“There is an Australian app that allows you do some really exciting things like download weather forecasts, calculate the most efficient altitude to fly at, and put useful overlays on maps. The developers are planning to release a New Zealand version and the School of Aviation is getting involved with its beta testing.”

While Mr Poduval is reserving judgement on the use of iPads until the trial’s completion, he is pleased the School of Aviation is again at the forefront of professional pilot training in New Zealand.

“The school is fortunate enough to have a fleet of state-of-the-art Diamond aircraft with all the latest technology installed. It’s important to us that we continue to assess and adopt new technologies as they become available in keeping with Massey’s philosophy of being a defining university.”