Home > About Massey > News > Opinion: Reflections from a palace in Salzburg

Opinion: Reflections from a palace in Salzburg Participants of the Salzburg Global Seminar in the Grand Hall of the Schloss Leopoldkron, including Dr Anna Matheson from the School of Health Sciences.

Who would have thought there is an organisation whose main activity is facilitating pop-up think tanks to challenge current and future leaders to solve issues of global concern? Well, the Salzburg Global Seminar does just that.

The organisation runs sessions with invited guests on globally relevant, diverse topics in their glorious home, the Schloss Leopoldskron, in Salzburg, Austria, which also happens to be the where The Sound of Music was filmed. As an aside, although the movie was filmed on the magnificent grounds of the Schloss, the inside was not filmed as a session was underway at the time – and it was considered extremely important the fellows were not disturbed in their ruminating.

Founded in 1947 by three Harvard students, the Salzburg Global Seminar was intended to be an international forum for those seeking a better future for Europe and the world following World War II. As the organisation’s website states: “The founders believed that former enemies could talk and learn from each other, even as countries reeled from the ravages of war. Looking beyond Europe’s immediate needs for physical reconstruction and economic development, they argued for a “Marshall Plan of the Mind” as a critical element of recovery.”Bringing countries together to talk, who had long been at war, was meant to be facilitated by the beautiful and calm setting of the Schloss Leopoldskron.

I arrived at the Schloss, surrounded by snowy mountains and at the edge of the icy lake, the Leopoldskroner Weiher, to participate in Session 592 Building Healthy Communities: the role of hospitals. I was invited to attend because of my research and thinking on health inequalities and complexity in social systems. Most of the other 59 fellows were leaders from health and community organisations from around the world. The largest representation was from the United States of America as the Robert Wood Johnson Foundation (the biggest public health philanthropy organisation in the US and funder of the World Health Organisation’s Commission on the Social Determinants of Health) was a partner in the session. 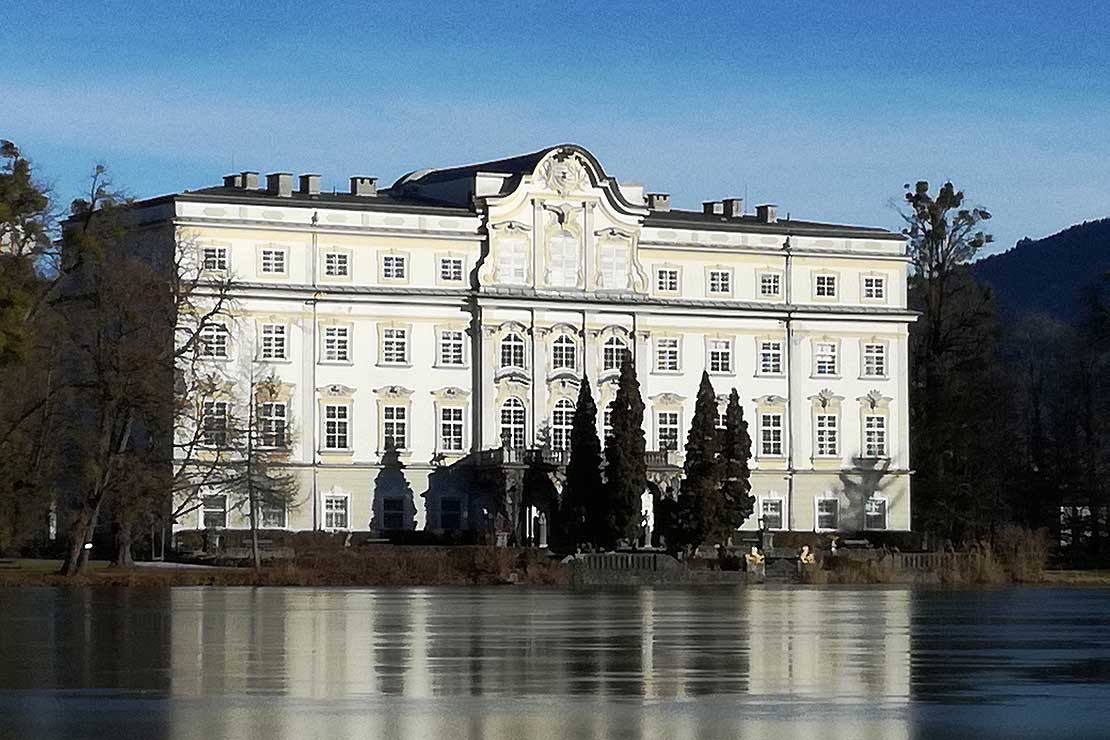 The four and a half days of the meeting were full of talking, presenting, sharing, planning and eating in majestic, history-laden rooms. A photographer was continually capturing the discussions, a graphic artist depicted the days’ ideas and each morning on our desks was a four-page newsletter with photos and stories of the previous days ponderings. Not insignificant was the bierstube – the basement bar in the Schloss where conversations continued – as well as table tennis, foosball, karaoke and dancing.

Another aside I need to mention was the “dance-off” that spontaneously happened among the men on at least two of the nights – though I would be remiss if I suggested there was a clear winner amongst the Colombians, the Scottish or the Rwandans.

When we weren’t hanging out in an Austrian basement, we were self-organising into working groups to come up with tangible plans for action around the main themes that were emerging from the meeting. The connecting thread was the imperative to be “people-centred”, even when considering big system challenges. One of the working groups began developing a framework for systems change to create more sustainable health systems; many at the session were frustrated by their inability to sustain health system changes and the often unseen barriers to change that existed. Another group aimed to build a business case for why urgent attention should be given to understanding the intersection between individual, community and planetary health. A third group developed plans to create a global tool kit to help hospitals improve their capacity to contribute to building healthier communities. A fourth group mapped out a strategy for how to take “innovation to scale” in order to impact significant public health challenges. Another focussed on the role of clinicians and how services could be developed to assist them to reach further into the community. A sixth group explored how global attention might be moved away from prioritising big data and more towards people-centred intelligence. While the last working group planned a collection of articles to be written for the British Medical Journal to showcase the session themes and experiences of those attending.

Participating in Session 592 of the Salzburg Global Seminar was extraordinary. Aside from the surreal setting and scintillating company, particularly heartening for me, was hearing all the passionate discussions that normalised talk of complex systems and the need for systems change in relation to health and equity. The tide is really turning. Fragmented, linear thinking and actions that disregard the wider systems within which they are nested is falling out of favour. A deep and considered understanding of social complexity is shifting away from being on the fringe as it becomes clearer that different thinking, and different methods and actions, are necessary if the complex global, and local, challenges that we face are to have any chance of being addressed. Impacting the rising prevalence of chronic health conditions in our communities and reducing health inequalities are just two of these challenges that require systems change in order for progress to made. I am looking forward to the on-going work, and new relationships formed from Session 592 in pursuit of this progress.

Dr Anna Matheson is a senior lecturer in Public Health from the School of Health Sciences and Associate Investigator, Te Pūnaha Matatini – Centre of Research Excellence for Complex Systems, Data and Networks.