When Hamish Dick was offered the chance to play bagpipes competitively in Scotland, he couldn’t say no. The newly capped Bachelor of Arts (BA) graduate relished the chance to live his pipe dreams and fulfil his study aspirations through Massey’s distance learning programme.

He graduated in Wellington last week and was also recognised with an Outstanding Achievers Award from the College of Humanities and Social Sciences for his top academic grades, accomplished while he was often on tour with his band or holding down a 30 to 40 hour-week job.

Hamish says combining an exciting globe-trotting existence as a touring musician with distance study and a bevy of interesting jobs – including working for an MP in the Scottish National Party on the independence campaign in a role which took him to Westminster – was a brilliant way to get an enriching education.

“What I really appreciated was that it [studying politics and English literature by distance] gave me a different perspective on what I was seeing around me at the time,” Hamish says. Live, work and study abroad - 'an education unlike any other'

In a speech he gave at the Outstanding Achiever Awards ceremony in Wellington (the first of three on each of Massey’s campuses), he said his multi-tasking journey began in 2014 the year before he started studying at Massey. His piping hobby had taken him to Scotland where he competed in the premier grade at the World Pipe Band Championships in Glasgow. After returning to New Zealand, he didn’t feel ready to settle down in one place as initially planned.

“For me, my uncertainty and itchy feet created quite a conflict. I knew I should study. I enjoy learning, and I understand the value of a quality university education. However, the pipes of Scotland were calling me back.”

His father, Ron, himself an ex-student and BA graduate of Massey’s distance programme, made his son aware of the opportunity to study while not physically based at a New Zealand campus.

So, at the beginning of 2015, Hamish packed his bags and departed for Edinburgh, having enrolled at Massey in a BA. “What a decision! If I can reduce what I have learnt over the past three years to one soundbite, it is that ‘the classroom is most certainly not the only source of education’.

“I credit Massey University for providing not only the quality tutors and lecturers who have helped direct my education over the past three years, but also for providing me with the opportunity to have an education unlike any other. That is, the opportunity to live and work abroad, experiencing the ‘real world’ first hand, while competing with my pipe band across Scotland and Ireland, travelling Britain and Europe, and making some of the best friends I have ever known,” Hamish said in his speech. 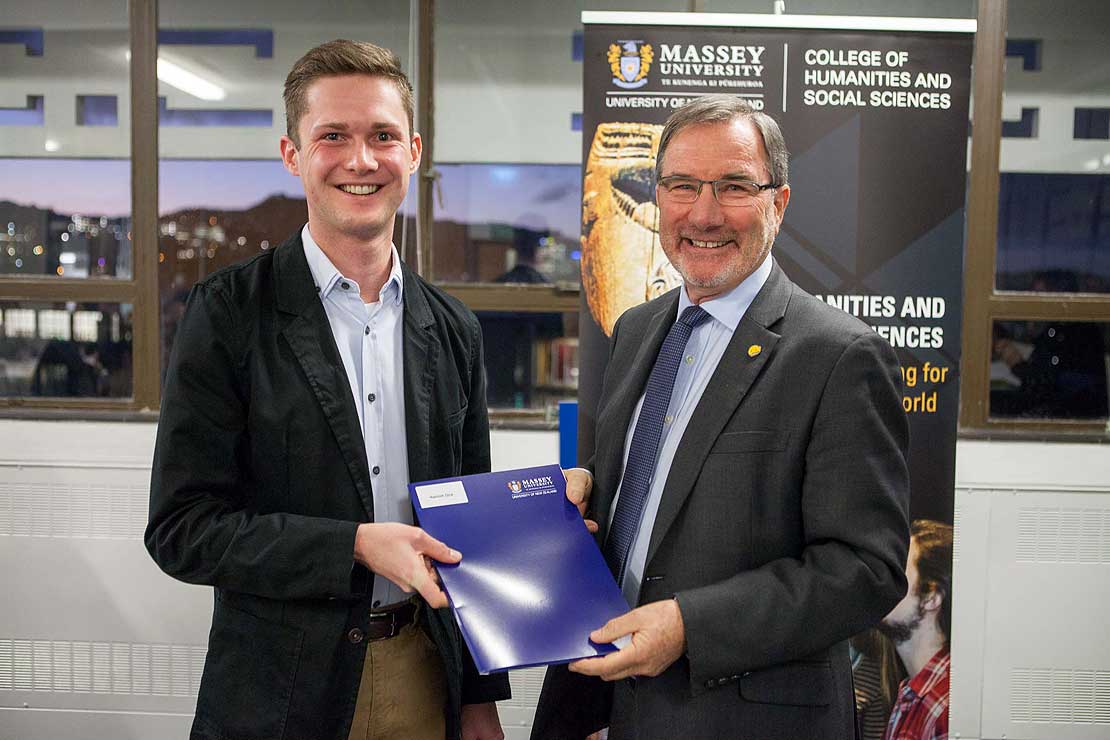 Proximity to Westminster and Wordsworth a bonus

“How many other Kiwi students could say that they have had work experience at Westminster, and spent their post-exam holidays in Rome? What other English students have walked in the footsteps of Samuel Taylor Coleridge and William Wordsworth while studying their works, lived in the city of Walter Scott, and whose local pub was next door to Robert Louis Stevenson’s birthplace? What other Kiwi students of politics experienced first-hand the Brexit vote while in London and worked for the Scottish National Party campaigning for independence? All while studying.”

And while his busy, demanding schedule compelled him to hone his time management skills – something he says employers recognise and value in distance students – he says that education is “more than that.”

“Education is what you make of it. Education is about constantly desiring knowledge and seeking it in all its forms. For this, I believe that no other university in the country fosters this personal development as much as Massey, due credit to its distance programme and arts faculty,” he told fellow recipients at the Outstanding Achievers Awards ceremony, one of three to honour 47 students in the College of Humanities and Social Sciences who achieved the highest grade-point averages in 2017.