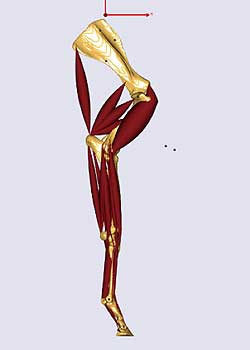 The model, with the limb segments as
determined from CT, and the muscles
placed with their exact origins and insertions. 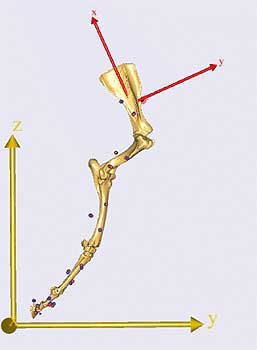 Animated model, with markers on the
limb segments 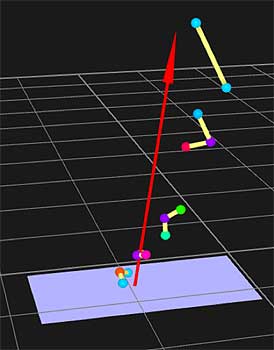 Screen shot of the markers on the forelimb
segments, with the ground reaction force
projecting up from the force platform
as the horse trots over it.

Massey University researchers are investigating limb injuries in race horses by capturing the 3D movements of their limbs on camera and modelling it on computers.

“The various equestrian industries in New Zealand make up about 2 per cent of the country’s GDP, and about a third of horses that start training and racing are retired prematurely due to injury. About three-quarters of these are musculoskeletal injuries. These injuries, therefore, cause a fair amount of wastage, both in terms of the welfare impact on the horse and secondly, to the income potential. The purpose of our work is to assess the effects of variable ground surfaces on the forces applied to the limb during gait.”

The experimental work involves having the horses trot and canter along a runway in a sand arena over a force platform embedded in the surface in front of six infrared cameras that record the 3D movement of the horse’s limb segments on a consistent surface.

This baseline data allows the limb segments to be modelled and animated and allows an estimation of the forces applied to the ligaments and tendons. It can then be used to test the strain in ligaments and tendons when the limb is presented with uneven or variable footing and ground reaction forces – in the case of this study, a softer, or harder than expected surface in the limb’s stance phase.

This will allow the researchers to determine whether horses are capable of responding to a sudden change in ground condition during the perturbed stance phase, or if the response is not until the following stance phase, at which point the ground surface may have changed back.

“The physical properties of equestrian riding and racing surfaces have been associated with limb  injuries in horses, and most of the research in this area has focussed on quantifying the surface’s ability to absorb the concussive landing and shear forces between the hoof and ground.”

“On soft ground, the surface absorbs the landing forces, and so the limb can afford to be relatively stiff. On a harder surface, the limb becomes more compliant so it can absorb the concussive impacts and reduce the impact shocks to the limb. However, this compliance may come at a cost… if the distal joints are less supported by tendon tension, then disruptive perturbations caused by hard uneven ground may cause the hoof to twist on impact and result in ligament or joint damage.”