A Kermadec red-crowned parakeet, or kakariki, seen in abundance on Raoul Island after a 150-year absence. 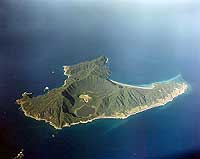 The natural re-colonisation of kakariki on Raoul Island after a 150-year absence has set a unique international example for conservation management, University conservation researchers say.

The exercise could be repeated by kakariki and other vulnerable bird species on predator-free islands closer to New Zealand.

A recent study has revealed how kakariki (red-crowned parakeets) spontaneously migrated to Raoul from neighbouring islands and created a new population, says Massey conservation biologist and PhD researcher Luis Ortiz-Catedral, from the Institute of Natural Sciences at Albany.

The remote volcanic island lies about 1000km northeast of the North Island, halfway between Auckland and Tonga. It is the largest in the Kermadec Islands Marine Reserve, New Zealand's largest marine reserve.

In April institute staff from the Ecology and Conservation Group travelled to the island with colleagues from the University of Auckland and the Department of Conservation on the Navy frigate Canterbury and stayed for a month. They were astounded to observe a flourishing population of the colourful parakeets so soon after the eradication of pests.

Between 2002 and 2004 the department carried out the world's largest multi-species eradication project, removing cats, rats and goats from the island. Soon after that kakariki, which have not been known to breed on the island for 150 years, are thought to have flown from the nearby Herald Islets island group, about 4km away.

Mr Ortiz-Catedral and Associate Professor Dianne Brunton have published a paper describing the phenomenon and say their observations give hope for conservationists managing endangered bird species in other parts of the world because it appears birds will voluntarily move to safe breeding locations and thrive if humans remove predators first. This would remove the need for artificial and more costly translocations, which involve moving birds by helicopter or boat to new predator-free locations.

“The natural re-colonisation of parakeets on Raoul Island from a satellite source population is to our knowledge, a first for parrot conservation and the first documented population expansion and colonisation of a parrot species after removal of invasive predators,” Mr Ortiz-Catedral and Dr Brunton say in the paper, just published in Britain's Conservation Evidence journal.

Mist nets were used to capture more than 100 kakariki for data collection. The researchers estimated 44 per cent of the birds were born within the previous year and they observed breeding and nesting for the first time on the island since 1836.

Mr Ortiz-Catedral, who has coordinated two translocations of kakariki by helicopter between islands in the Hauraki Gulf and the mainland as part of his doctoral research, says what he witnessed at Raoul Island has major implications for conservation management in New Zealand's offshore islands as well as other places world-wide where parrot species in particular are under threat.

“It's very exciting - a lot of people are not aware of the cutting edge conservation happening around New Zealand.”

Raoul Island's permanently manned station has been maintained since 1937, and includes government meteorological and radio stations, and a hostel for conservation staff and volunteers.