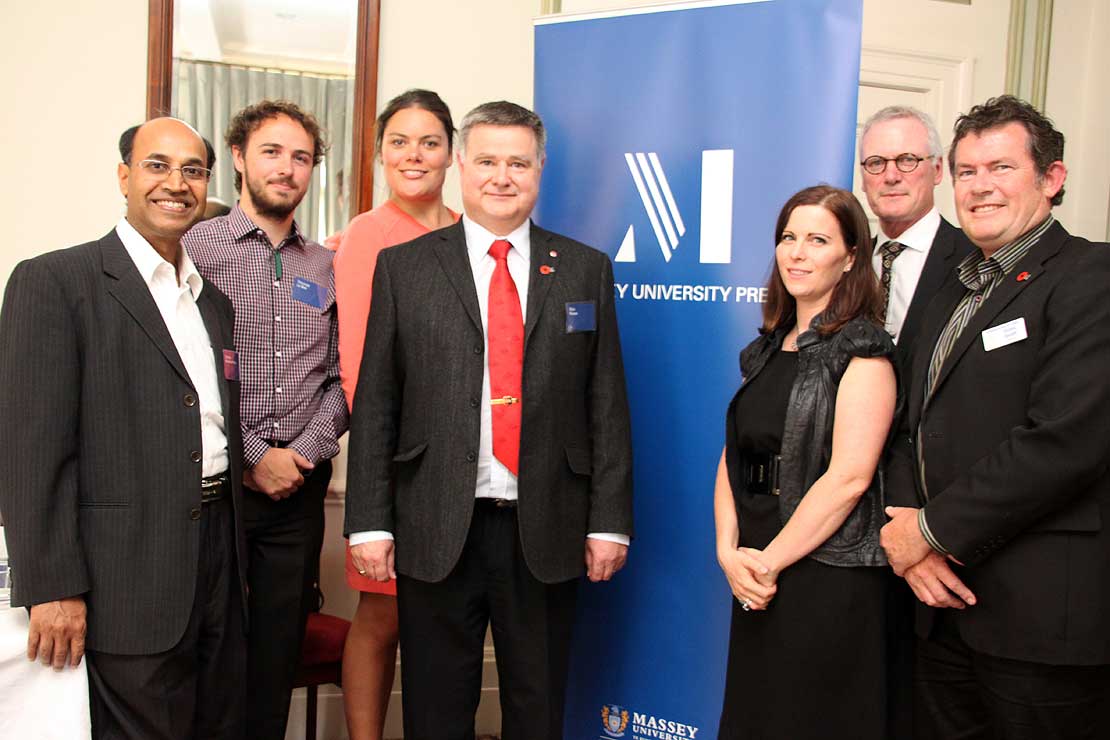 Massey University scholars and authors will have the chance to share their specialist knowledge with a much wider readership thanks to the launch of its new publishing press.

Massey University Press aims to become a world-class academic press, publishing scholarly works by its top researchers – as well as non-Massey authors – in a range of signature areas that will appeal to a wider international audience.

In his speech at the Friday launch, Vice-Chancellor Steve Maharey said it was “vital” for the University to have its own press in order to extend its global outreach and to fufill its goals of “shaping the future of the country and taking the best of New Zealand to the rest of the world.”

He says the initial output of the press will be “a small number of very well chosen books that profile what the university stands for.”

The press would establish itself as “highly innovative”, exploring new publishing options in the future such as online publications that can be downloaded. It was important that the press was not exclusive to Massey authors, he added.

The endeavour will start modestly by publishing up to three books in its first year of active publishing in 2016 – including in eBook format – expanding to around ten books and three eBooks in its fifth year.

Massey authors have published 122 books through various local and international publishers in the past three years. Their work covers a range of genres, from history and fiction to science, technology and business topics, reflecting the diverse research covered by the University’s five colleges – Business, Creative Arts, Health, Humanities and Social Sciences, and Sciences.

The press’s inaugural editorial board was introduced at the Friday launch on the Manawatū campus, attended by around 40 people, including Palmerston North Mayor Grant Smith.

Professor Kathryn Rountree, a social anthropologist in the School of People, Environment and Planning, will chair a broad-based advisory group, yet to be established.

“The Advisory Group will take advantage of the depth of publishing experience held by Massey University staff,” says Professor Harper. “The involvement of the group in supporting the establishment of the press means that it will benefit from this breadth of knowledge. Working alongside the Editorial Board, the Advisory Group will help guide the Press towards international success by providing expert publishing advice.”

Professor Harper, a war historian and Massey project manager for the World War I Centenary History series, says that once it is underway the press will commission books as well as respond to manuscript submissions and publishing proposals. And he envisages some books being translated into other languages where there is a market.

But it will not be a ‘vanity’ publisher of niche works unlikely to appeal to a non-academic audience, he assures.  “We want to publish for an intelligent lay readership – not just university staff and students.”

A key element in ensuring the success of the press, at a time when book sales are slumping in the face of digital media, is having a distinctive brand and logo, he says. The Massey University Press logo – designed by the College of Creative Arts’ Open Lab design director Anna Brown – features elements of Māori design and spiritual values to embrace the notion of baskets of knowledge to underline the significance of education and higher learning.

Following the launch, the search is underway for a director/publisher who will work with a team of talented freelance book editors, designers and promoters. The press will have an office based on one of Massey’s three campuses.

Massey joins Auckland, Otago, Victoria, Canterbury and AUT universities as the sixth university in New Zealand to have its own publishing house.

Glyn Harper is a professor of War Studies at Massey University, and project leader for the WWI and New Zealand Centenary Project. He is the author of numerous military history books, including Kippenberger: An Inspired New Zealand Commander; In the Face of the Enemy: The complete history of the Victoria Cross and New Zealand; Dark Journey: Three Key Battles of the Western Front; Images of War: World War One: A Photographic Record of New Zealanders at War 1914-1918 and his most recent The Battles of Monte Cassino: The Campaign and its Controversies. He has written a number of children's books, including Le Quesnoy and the recently published Jim's Letters.

Anna Brown is a senior lecturer in the College of Creative Arts’ School of Design, and director of Open Lab – an in-house design studio established by the college. She is a book designer, and teaches in the visual communication degree.

Subhas Mukhopadhyay is a professor of Sensing Technology in the School of Engineering and Advanced Technology. He has written four books, edited 21 and has held a range of editorship roles for specialist journals on engineering, mechatronics and technology.

Sam Peterson has been teaching Agricultural science, Science and Veterinary science at Massey for 36 years. His publishing experience includes five years as editor of the New Zealand Society of Animal Production for five years.

Kathryn Rountree is a professor in Social Anthropology in the School of People, Environment and Planning. She has published six books with New Zealand and top international publishers on pagan movements and spirituality in Europe, as well as on the craft of writing. Prior to her academic career, she published 10 children’s books based on her background in archaeology, about New Zealand’s early history from the arrival of Māori through to first contact with European settlers.