Swapping the cycle track for the farm track Kate Stewart and her lamb Skippy.

Reliable, compassionate, dedicated and supportive – these are the words fellow students have used to describe third-year Bachelor of AgriScience student Kate Stewart.

While she would scoff at these descriptions herself, the Young Farmers Club Sally Hobson Award is only given to one student a year and nobody was surprised when she was named the recipient at the Agriculture Awards Dinner this year.

An active member of the Young Farmers Club, Massey’s largest student club, she was described as the person who always put her hand up, went the extra mile, but never made a big fuss about it.

Having just sat her final exam, she will now move into her first job as a Dairy NZ trainee Consulting Officer, starting next year in Te Awamutu. However, if things had gone to plan, things may have been much different.

A few years ago, Ms Stewart was competing at the Junior World Track Championships in South Korea, looking at a promising career in cycling while studying by distance, but sickness put those dreams on pause. While some could be forgiven for begrudging the hand they were dealt, Miss Stewart saw the opportunity.

“Before I got sick I was actually leaning more toward a Bachelor of Agricommerce as it would be easier to study by distance while I trained and competed, but because I was going to be in the Manawatū I could actually study a Bachelor of AgriScience as I would be there on campus to do the more practical elements of the degree.

“It turns out changing the plan turned out to be the best decision and I kind of just fell in love with the degree.”

Miss Stewart reflects that she never thought about how different her degree was until talking to other students.

“Going out to a farm, talking to a real person with real issues for you to solve, collecting the data and then going back to write an assignment – I guess that’s a lot more applied than your average degree. You do the theory in the first year to get the base knowledge, but it just gets more interactive from there.

“We managed a small flock of sheep for a whole year and competing against others for the highest lamb weight. You bring your theory into the management and see it pan out.”

However, one of the flock stood out from the others and when it was rejected by its mother, Ms Stewart decided to make him part of the family. Named Skippy, after his favourite way to walk, he became the graduating classes official mascot and now has nearly 500 followers on Instagram. Skippy used his newfound fame to help her win the video competition at the Massey Agriculture Dinner Awards with their entry ‘Day in the Life of a Massey AAAAAAg student’, which highlighted student life.

When asked what is the best part of her degree, Miss Stewart quickly comes back with “the people you study with”, but also reflects upon her first field trip that cemented her belief she has chosen the right path.

“We went out to a farm in Woodville with a lecturer, who was really awesome, and I remember being so overwhelmed with the task of making a cash flow budget for a real farmer. It went from the practical data gathering to an assignment where we put in the late nights together and came back with the results – it was just really rewarding.”

Former vice-chair of the Massey Young Farmers Club, Miss Stewart has delved headfirst into life as not only a student, but the community aspect. The club being one of the more active student groups on campus, running social, practical and networking opportunities throughout the year for members.

“Other degrees talk about strong competition between students and a degree of separation from students not in your major, but we end up hanging out inside and outside of university. You help each other out, and generally know what your fellow students are up to and you have a support network to lean on.” 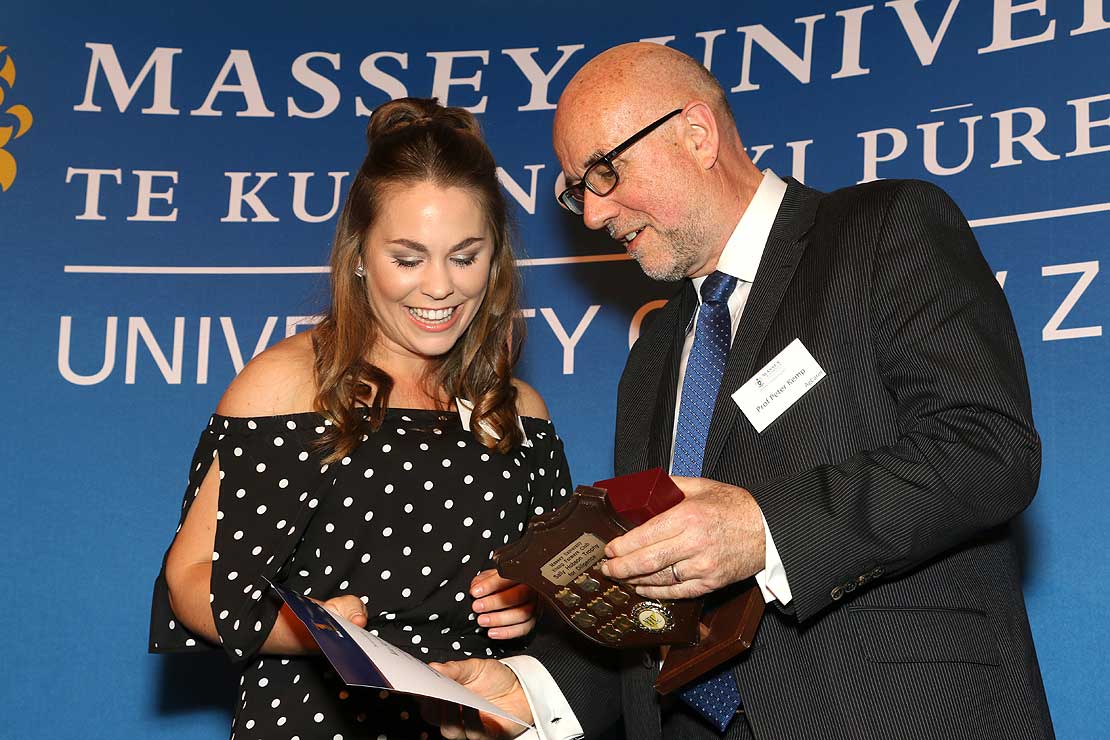 As part of the Bachelor of AgriScience, students must spend at least 26 weeks of full-time work in an area related to their major. Ms Stewart spent her first 13 weeks working on the family’s dairy farm and the second 13 weeks working for within Livestock Improvement Corporations' Research and Development Group.

“For LIC I was working on a feed budgeting project which ended up being a great introduction to something I had limited practical experience with, but I had plenty of the skills I needed from uni to cope.

Although changing her mind several times about what job she wanted after study, Ms Stewart ended up going for the job she dreamed for in high school.

“When I was in year 12 at Palmerston North Girls’ High School, a Dairy NZ consulting officer came into our TeenAg group to talk about what she did on a typical day. It sounded amazing and then she showed us her diary for that week and I thought that’s what I want to do.”

Ms Stewart had an early introduction into the agricultural world, spending time with her grandparents and uncles on the family dairy farm.

“This really sparked my love for agriculture, and my uncles have taught me a huge amount about dairy farming. Even when I was full-time in training, I would get out to the farm to help whenever I could”.

While she is not cycling at the moment, Cambridge’s Avanitdrome will be on her front doorstep if she decides to get back on her bike.