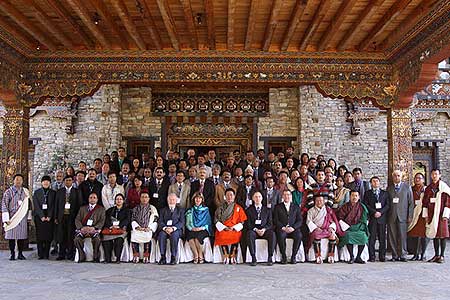 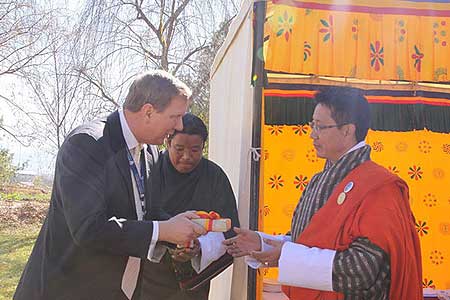 Chances of a pandemic spreading across South Asia have been reduced by a $10 million training programme delivered by Massey University specialists over the past four years.

Veterinarians and biosecurity specialists in the seven countries have now set up a regional network that will help control the spread of zoonotic diseases.

A "One Health" symposium was organised by Massey in the Kingdom of Bhutan last week and was attended by University Vice-Chancellor Steve Maharey, who was able to see the results of the work of a team from the Institute of Veterinary, Animal and Biomedical Sciences that includes Associate Professor Eric Neumann, Dr Peter Jolly, Dr Joanna McKenzie, Dr Ron Jackson and Professor Emeritus Roger Morris as well as a number of international disease experts from around the world.

The symposium hosted by the Royal Government of Bhutan, was the final event of the four-year Regional Training Programme on Epidemiology and Biosecurity for South Asia project which was funded by the European Commission through the Avian and Human Influenza Trust Fund, administered by the World Bank, and implemented by Massey University, New Zealand. The symposium was attended by 120 technical experts and senior policy-makers from seven South Asian nations, including Afghanistan, Bangladesh, Bhutan, India, Nepal, Pakistan and Sri Lanka. Additionally, representatives from international organisations including the World Health Organisation, the Food and Animal Organisation of the United Nations, and the World Organisation for Animal Health also attended the symposium.

Mr Maharey says the One Health project is making a, “very significant contribution" to the battle against infectious diseases that are transmitted between animals and humans. “Observers at the symposium talked about the intellectual leadership Massey was providing, plus our ability to deliver programmes that required collaboration between partners from very diverse backgrounds, he says.

In the first phase of the programme, two degrees – a Master of Public Health (Biosecurity) and Master of Veterinary Medicine (Biosecurity) – were delivered to 68 students from across South Asia. This was followed by a second phase which saw the development of One Health Hubs in each of the countries and launching of an online communication and collaboration network called Hubnet (www.hubnet.asia) that will be used in the future to monitor outbreaks of disease and share information about managing them.

"This has been an outstanding example of Massey University expertise being applied to tackle one of the biggest issues the world faces – combatting epidemics," Mr Maharey says.

Dr Neumann says future plans for One Health at Massey are already being implemented.  The Master of Public Health (Biosecurity) and Master of Veterinary Medicine (Biosecurity) degrees are currently being taught to cohorts of government disease specialists in China and Mongolia. In addition, the One Health team will be starting another three-year programme of work in Afghanistan, Bangladesh, Bhutan, and Nepal in 2014 through a project being funded by the European Union. “This project will again make use of the MVM and MPH (Biosecurity) degrees combined with field studies to leverage the existing network of people and organisations created through the World Bank project.

Dr Neumann says Massey has established itself as an important and credible partner for One Health activities in Asia.