A new device designed by engineers and veterinarians at Massey University seeks to change the way we understand animal pain, starting with sheep.

Deterring pain is vital to establish optimum levels of animal sedation and pain management for various alignments. However, unlike human pain, animal pain must be determined by studying an animal’s reactions because of their inability to verbally feedback pain levels.

The current method, known as nociceptive threshold testing, involves restraining an animal in a clinical setting and fitting a device that uses pressurised oxygen to press a blunt rod on the animal’s skin with gradually increasing force until the animal shows a sign of discomfort, such as ear flicking, tail flicking or head rubbing.

While the pressure is similar to firmly pressing on your hand with your thumb, the process can be stressful for the animal because they are taken away from their regular environment, restrained, and the device itself is very loud.

Lecturer in Veterinary Anatomy and Histology, Dr Preet Singh says that the current device makes reliable results inaccurate due to other factors that cause the animal to show signs of discomfort.

“Assessment of animal’s pain is a crucial aspect of veterinary science and is extremely difficult to measure, because you cannot simply ask the animal what it is feeling, finding out what medications can reduce pain is not an easy task.

“When looking at research into sheep pain, we thought there has to be a better way for the animal and for the researcher, but we needed the engineering know-how. To have the sheep in its natural environment is not only less stressful for the animal, but also takes the animal away from the variables that were skewing the results,” says Dr Singh of Massey’s Institute of Veterinary, Animal and Biomedical Sciences. 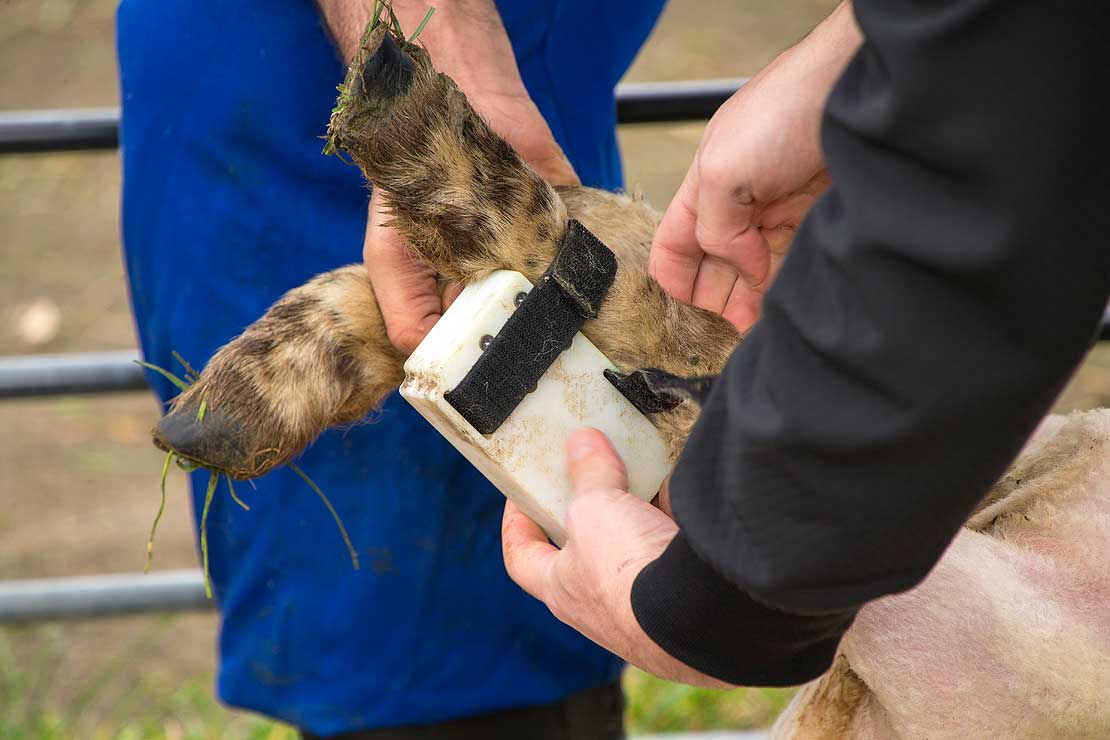 That challenge was put to Engineering Programme Director Associate Professor Gourab Sen Gupta of the School of Engineering and Advanced Technology says the new device is everything the old was not.

“When we joined the project, a number of problems were identified in the device that all centre around the design. The gas-powered mechanism made it immobile, noisy, and the friction in the system between the rod and the barrel resulted in an inconsistent rate of force application. From an engineering perspective, it is a fantastic project to get your teeth sunk into, because it has so many variables that we were able to work with one another to solve, but it also solves a real issue.”

The new device weighs half of the old one, at only 198 grams, with a 3D printed enclosure, which means the sheep requires very little time to get acclimatised to wearing it. The device is strapped onto the distal forelimb of the sheep below the carpus joint, with soft cotton pads in between to avoid discomfort to the animal, and the sheep is then released back into the paddock with the other animals.

The device can  be worn in the paddock due to the use of battery power instead of gas, which also allows less friction for greater accuracy and less noise for the animal’s comfort.Additionally, the information is received back in real time. The device is triggered by signals from a microcontroller, which in turn receives the commands from the remote user via the WiFi module. The data is then transmitted back to the user’s computer on the WiFi link.

A number of fourth-year Bachelor of Engineering (Mechatronics) students worked on the project, including William Wilkinson, Akshay Pandey and Mohammad Alkandari.

“The students focused on the mechanisms that would not just be quiet, robust and provide minimal vibration for accurate measurements, but also introduce things like WiFi to make it very easy to remote control the device and gather results. It takes more than just technical know-how, but cross discipline collaboration to find the answers- something we really want our students to learn early on.”

Early testing indicated the device’s accuracy and future work will involve injecting analgesic drugs in sheep and measuring the efficacy of drugs using the device. It yielded highly repeatable results in more than one testing.

It is  a fraction of the cost of the old system too. Dr Singh says the technique and assembly described here makes it suitable for developing such nociceptive devices for other animals too.

“The collaborative approach has provided enormous success for all involved, with special mention given to Associate Professor Paul Chambers, who played an important supervisory role for the animal aspect of the project.”