A Massey University team has developed new ways of predicting disease-hot spots, created by humans changing the environment, to help identify where and how society can mitigate the risk of infectious disease emergence, such as Ebola Virus Disease in Africa.

The team applied their model to the tropical forests of Africa and it identifies several areas of high-risk for disease emergence. The results can be used to guide on the ground researchers’ efforts investigating potential hotspots of disease emergence and help managers understand how habitats can best be protected. 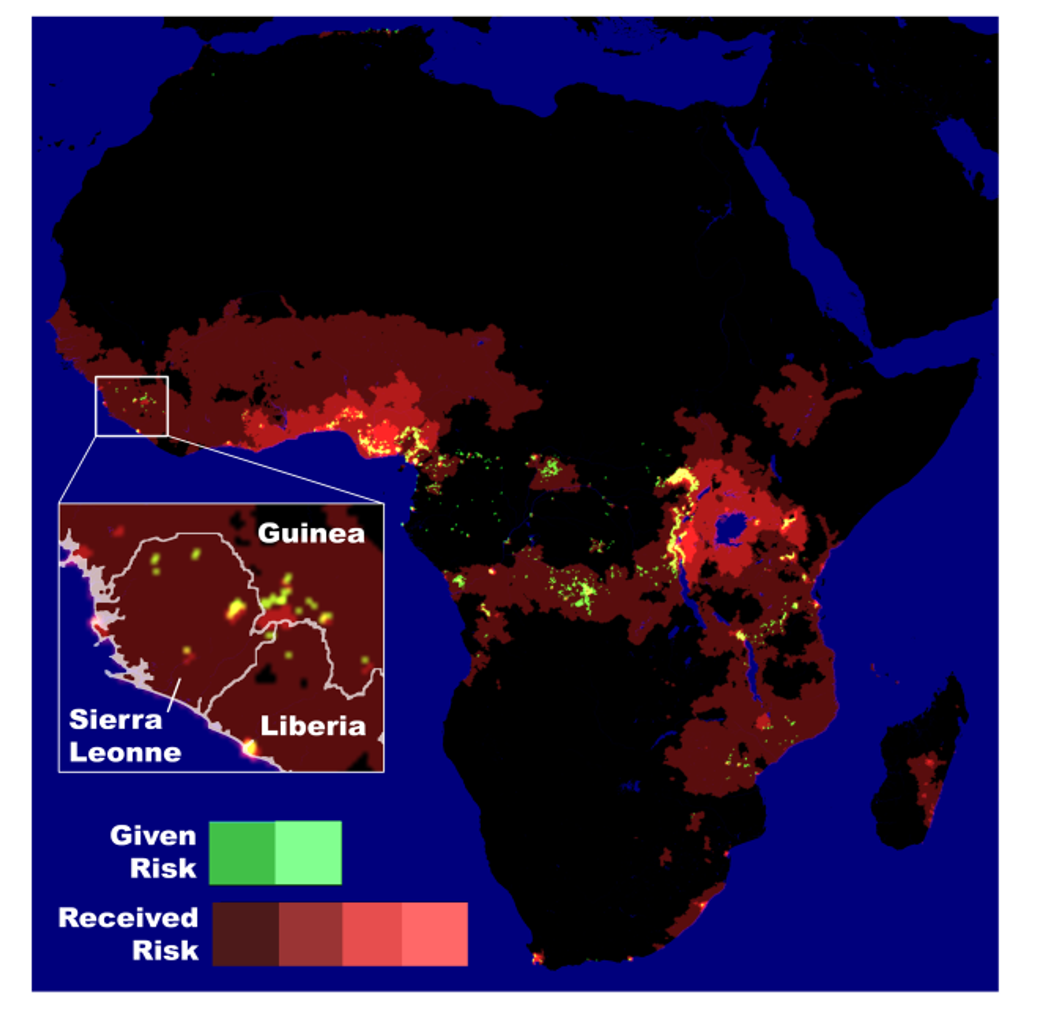 A map of the predicted hotspots of pandemic disease emergence.

“The vast scale of the estimated pandemic-associated risk across Africa with respect to the emergence of Ebola in Western Africa in 2014 clearly demonstrates that internationally coordinated efforts are required to avoid catastrophic events in the future. By using the well-characterised species-area-relationship from ecology, we have developed a model framework allowing us to predict the effect of people encroaching into natural habitats and how they experience the risk of novel infectious disease emergence.”

“Our results suggest that it is possible to identify high-risk areas, such as parts of the forests of Africa, and show where surveillance measures and mitigation techniques need to be applied for disease emergence. Interestingly, while not designed specifically to do so, it did a good job at predicting the locations in Africa where Ebola virus emerged, including in West Africa and although not included in the paper, the current pandemic affecting Beni in north-eastern Democratic Republic of the Congo.”

The model suggests that the implementation of smaller-scale land-use strategies linked with conservation efforts may help to improve the overall burden from emerging infectious disease.

Useful to scientists and governments

Co-author, Associate Professor David Hayman says the model could be extremely useful to scientists and governments.

“As human populations continue to expand into habitats, we propose that such general frameworks are essential for policy makers because they provide clear guiding principles that enable common ground to be established between species conservation and novel disease emergence risk mitigation. If the results can be implemented through policy and habitat management changes, they may provide a win-win situation of reducing the likelihood of future outbreaks of viruses in humans and maintaining biodiversity.

“Instead of taking an either-or approach, our analyses extend previously well-established links between habitat fragmentation and biodiversity loss to the new area of disease emergence risk in one model. If you look at our results, some seem intuitive, such as there being hotspots of disease emergence risk in parts of Africa, but previously there wasn’t an overall modelling framework to allow us to predict them based on basic principles.” he says.

Dr Jonathan Marshall, the lead mathematician on the project says, “developing a relatively simple model that made such interesting predictions that captured real world situations was a real highlight of this project’.