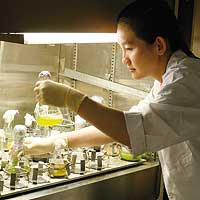 
Microalgae vs the rest

This difference in productivity per hectare has major
implications. Take the United States, which is relatively
blessed with arable land. To fulfil half of its transport oil
needs, the US would need to devote a clearly
impractical 24 per cent of its total cropland to cultivating
oil palm. By contrast, microalgae could accomplish this
with just 1 to 3 per cent and it does not depend on the
availability of fresh water – brackish or salt will do.

When you think about it, the difference in productivity
is not that surprising. Only the oil palm kernel is
harvested for oil, whereas the entire biomass of the
algae is processed. Then, too, unlike an oil palm, the
algae has no overhead in the form of supporting tissues,
or systems for circulating water and nutrients. Each cell
is a stripped-down factory supplied all of the necessities
of life by the medium in which it is suspended: water,
carbon dioxide, nutrients and light. It is common for the
mass of microalgae to double in just 24 hours.

There are other advantages too. Every 100 tonnes of
algal biomass fixes around 183 tonnes of carbon dioxide
and production of fuels from microalgae can be carbon
neutral.

In the future we may well find that photobioreactors
become a valued adjunct to coal or gas burning power
plants, the carbon dioxide emissions being used to fuel
algal growth. 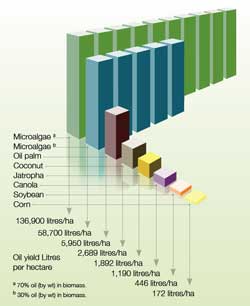 Comparison of some sources of biodiesel.

It is hard to find much good news in the current global economic crisis, but there is at least some. At the time of writing, oil is back to US $44 from the all time high of US $147 a barrel it hit on July 3, 2008; the price of food commodities such as rice and wheat have fallen – good news if you are an impoverished third world consumer – and the global growth in carbon dioxide emissions, though still alarming, will not be as fast as it would otherwise have been.
Some good news, but not much. At most, these are challenges momentarily deferred. The need to find viable substitutes for the world’s dwindling supply of oil is as pressing as ever; the world’s population and its appetite for foodstuffs continues to climb; and unless unprecedented action is taken we face the likely prospect of catastrophic climate change.
What options do we have, and what are the sorts of trade-offs involved? Let us look to an obvious example: the US decision to use corn as a feedstock to produce alcohol biofuel. The result? Currently the US devotes 25 per cent of its corn crop to producing 3 per cent of its fuel, produces negligible-to-no carbon benefit in the process, and takes productive land away from food production. (The question of how many people could be fed with the corn harvested to fill the tank of a single SUV is not a frivolous one.)
Now you may say that corn is a poor example – and I would agree. But all of the conventional biofuel crops involve allocating significant – or in many cases impossibly vast – amounts of productive land.
By 2050 the world’s population, now numbering 6 billion or so, is projected to hit 9 billion. Somewhere mankind is going to have to find a billion more hectares of arable land – and that is without even beginning to examine the implications of allocating land to the production of biofuel.
But there is a less conventional biofuel candidate that need not compromise our ability to grow food. You’ve seen it before. It is the same class of organism that lends the tinge of green to that neglected swimming pool. The hero of the day may turn out to be microalgae.

I first became aware of the microalgae’s potential as a fuel-stock when I was an undergraduate student at the University of Jos in Nigeria. For my research project, I studied Botryococcus braunii, one of the algae that bloom in fertiliser-polluted lakes and estuaries.
I found that wild-harvested, dried biomass of Botryococcus braunii contained by weight 70 per cent of a colourless oil, mainly botryococcene, which, with a little relatively unsophisticated chemistry, could be turned into a substitute for diesel, gasoline and jet fuel.
At the time, in the wake of the Iran-Iraq war, the inflation adjusted price of oil had soared from around $49 in 1978 to $98 a barrel. A paper I wrote ended on an excitedly prophetic note: “With rising oil prices coupled with foreseeable shortages, commercial extraction of botryococcene might become desirable!”

After Nigeria my career took me in other directions. I moved to University College London and then to Canada and used microorganisms and modified animal cells to produce various biological products. It was not until 1997 that microalgae again entered my professional working life.
I had taken up a position with University of Almería on the Mediterranean coast of Spain. This is a region best known for holiday houses for the wealthy and for kilometre on kilometre of plastic-sheeted greenhouses growing vegetables for export. The same temperatures and sun that favour greenhouse plants also favour the production of microalgae. Consequently, in Almería I and my colleagues focused on developing the production of microalgal products, particularly the same omega-3 oils found in fish oil. Microalgae are used to produce other commercial products, such as the food colorants beta-carotene and astaxanthin.
These are high value products – astaxanthin sells for thousands of dollars a kilogram.
Soon I found myself involved in cultivating microalgae in photobioreactors. I have maintained a strong interest in microalgae and microalgal products ever since.

Raceways and bioreactors are the two principal ways of commercially growing microalgae. In a raceway pond, an approach that has been around since the 1950s, the algal ‘broth’ is circulated around a shallow channel by a paddlewheel.
In a bioreactor, the more elaborate and expensive alternative, the broth is circulated through a closed system of transparent glass or plastic tubes.
Both approaches have inherent problems. In a raceway pond the culture inevitably ends up hosting unwanted species of algae together with the various organisms that feed on the microalgae; the temperature variation limits growth; and because, at best, the mixing will be poor, only the surface layers of algae will have enough light.
Photobioreactors, on the other hand, must be periodically cleaned; the build-up of oxygen that comes from photosynthesis must be prevented by its periodic removal; carbon dioxide must be fed in; and the systems must be cooled during the day.
The payback is that photobioreactors are many times more productive than raceway ponds. By my estimate, for a given volume of broth they are 13 times more so, and this concentration of algae in the broth also makes it less expensive to harvest.
But at the moment neither raceways nor photobioreactors are producing biodiesel at a price competitive with diesel proper.
Recently I did the numbers. My models showed that to be competitive with oil at US $100 a barrel, we would need to produce microalgae around nine times more cheaply than is currently being achieved. I am sure this will happen.
What I expect is less some great leap forward than the compounding of many small advances. Bioreactors will become increasingly efficient. Better ways will be developed to recover the algal biomass from the broth and to extract the oil from moist rather than dry biomass. The algae themselves will be genetically modified to become more productive and to thrive in a wider range of conditions. This is a young industry: the advances will be relatively swift.
It helps that at long last there is the prospect of sustained funding. Solazyme, for example, with support from Chevron, is attempting to produce algal fuel from genetically enhanced algae that use sugar to grow instead of sunlight. Other major oil companies – Shell and British Petroleum – are supporting large algae research programs in the US and elsewhere. And there is substantial venture capital funding available for research. Even New Zealand has its own Marlborough-based algal fuel start-up promising biodiesel from sewage ponds.
In early 2008 it looked as if the fabled combination of research universities, venture capital and the workings of the market would work their magic.
My hope is that, despite the world economic downturn, they still will.

Acts and deeds
Apocalypse tomorrow: sustainability and industrial design
A chat with the Chancellor
As long as you've got your health
A passion for dolphins
Bottle Drive
Pedal pushers
Waste not
Due Credit
Romanian doctorate for Prof Chisti
New bioreactor enables research advances