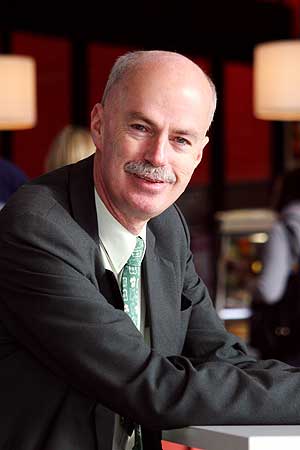 There is a term David Tripe is fond of using these days when people ask about the origins of the global financial crisis. It is ‘disaster myopia’, the very human tendency to severely underestimate risk. It comes, he tells me, from a paper coauthored by Richard Herring, a former visiting scholar at the Reserve Bank. Herring, Tripe recalls, was fond of ending his talks to local audiences with the snide comment, “but of course the bankers tell us that this time it is different, there won’t be a problem, nothing can go wrong”.
Nothing can go wrong.

Changing the face of banking?

One of the more interesting phenomenons in recent years has been the arrival of the NZPost-owned Kiwibank, which launched in June 2002 and, as of September 30 2008 had slightly more than 2 per cent of the New Zealand market share but more than 10 per cent of the New Zealand customer base. *
But is the playing field level? In December 2008, former BNZ chairman Kerry McDonald suggested that the over-the-counter business in PostBank branches was being used to cross-subsidise the banking business.
Tripe does find aspects of Kiwibank’s business model “a bit challenging”, making it almost impossible to determine how well it is doing. “Kiwibank’s cost structure is way higher than the other banks. It has a bigger branch network and assets that are a tenth of the size of the bigger banks. The costs allocated to Kiwibank by NZPost should be those of the additional banking activities of the branch. But how do we test that? We can’t.”
He also wonders about the long-term future of a bank that relies on having a costly physical presence in any community of some size. “If we look 20 years ahead are banks going to want branch networks as large as they have now? The answer is no. The only functions you need now are to deposit small business takings and to open an account. In Australia some of the information brokering for opening new accounts has been brokered to AustraliaPost, but they can do that because AustraliaPost isn’t a banking competitor.”

* Combined with the TSB and SBS, this brings total New Zealand-owned share of the banking market to between 3.5 per cent and 4 per cent.

Bank policy plan could cause widespread hardship
Caught up in traffic
Muscle, hair and skin
Acts and deeds

Apocalypse tomorrow: sustainability and industrial design
The other biofuel
A chat with the Chancellor
As long as you've got your health
A passion for dolphins
Bottle Drive
Pedal pushers