Reviews of recent publications by Massey alumni and staff.

The repeated call of a song
carves a name for silence.

There are no improper places to settle.
While the building of a nest goes on
in the eave above our kitchen window,
my wife peels a pear in a single stroke.
It sloughs its skin
like a lover shedding his clothes.
I mean gratefully.
Sometimes, her touch is light.

In the time it takes an oak leaf
to flutter to the yard,
a night can pass.

in the heart.
If you stand still,
listening, long enough,
you’ll never get off the ground.
Senior lecturer Bryan Walpert’s poems have appeared in such publications as AGNI, Crab Orchard Review, Gulf Coast, New Zealand Listener, Poet Lore, and Tar River Poetry. He won the 2007 New Zealand Poetry Society International Poetry Competition, is poetry editor of Bravado and winner of a national Tertiary Teaching Excellence Award for teaching creative writing in New Zealand. Etymology, from which What No One Bothers to Tell the Birds is drawn, is published by Cinnamon Press and is available from the Bruce McKenzie Booksellers in Palmerston North, from www.cinnamonpress.com,or from www.fishpond.co.nz, which has it listed at $32.99.
An’ Then the World Came Tae Oor Doorstep: Lockerbie Lives and Stories
Jill S Haldane, The Grimsay Press

Dedicated to “the good folk of Lockerbie”, Jill Haldane’s oral history of the crash of Flight 103 over the small Scottish town, of which she is a native, is an account of the intensely human aspects of the tragedy, told in first person by the survivors.
I remember that in nearby Kirkcudbright – about 39 miles from Lockerbie – the night of 21 December 1988 was bitterly cold and dark: the dense, penetrating cold and darkness of a winter far distant from the equator. Aged 15, I was curled up in front of the fire at an aunt’s house. Like many of the houses in Lockerbie and surrounding towns, its centuries old walls were two-foot thick stone, the windows inset to ward out the cold. A coal fire was burning in the stone hearth as it did almost every single day of the year. My 20-year-old cousin Kate and I were enjoying a night at home in “peace”, when, at around 8.00pm, ‘Border’ – as we called Border Television – interrupted programming with a shock announcement that some kind of emergency had hit a nearby town. Lockerbie lay on the other side of the regional town Dumfries. Yet it was close to home, and I recall the chill I felt as details emerged.
We had no idea that Flight 103 had exploded above the town. The Internet was years away; we didn’t have teletext. So we waited and watched until the call came: all medical personnel throughout the region were to mobilise. Kate, two years’ into her training as a nurse, drove off into the dark along the A75.
As it turned out, there was little the thousands of medical and non-medical rescuers who mobilised could do. All 243 passengers and 16 crew were killed. Amazingly only 11 Lockerbie residents were killed. Haldane chronicles both the event and the following days, months and years: from the setting up of a makeshift mortuary in an abandoned factory to the eventual trial of two  accused bombers.
Time has moved on. My family still own the house in Kirkcudbright, and my family, like many of those in Lockerbie who share their stories in Haldane’s book, still cluster round the small town of their origin. Border TV has gone, however, axed last year and a generation have entered adult life with no memory of the tragedy. They should read Haldane’s book, not just to hear of Flight 103, but for the social history of a time and place.
Jill Haldane is a museum studies graduate. Reviewer Communications Manager Lindsey Birnie is a journalism graduate now in the final months of a Massey MBA. 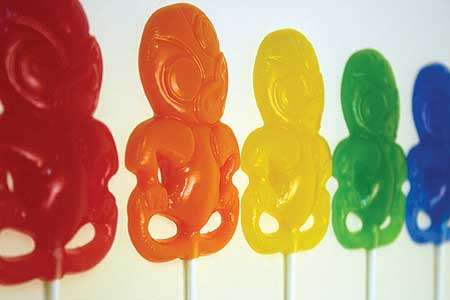 PLASTIC MAORI – A Tradition of Innovation

When plastic tiki replace pounamu pendants and tekoteko panels are made out of computer keyboards, can these objects retain their cultural integrity? Is synthetic still authentic?
Plastic Maori is an exploration of artworks made by Maori artists who use plastic and other synthetic materials, curated by Blumhardt Foundation/Creative New Zealand Curatorial Intern Reuben Friend.
Friend says, “I called the show Plastic Maori because this slang term refers to a Maori person who is culturally uninformed, but pretends to know their stuff. The show looks at the issue of cultural authenticity in contemporary Maori art, and plays with these ideas of artificial identity and fabrication. A common belief shared by the artists I’ve selected is that a tradition of innovation exists in Maori culture. The artists reinterpret customary art forms in a way that enables them to comment on contemporary issues.”
Plastic Maori examines the appropriation, commodification and mass production of Maori taonga (treasures), with art works including kowhaiwhai lightboxes, tukutuku puzzle cubes, jewellery, streetwear and even NZ’s most famous plastic Maori – Manu from Playschool.
Reuben Friend is currently studying towards a master’s in Maori Visual Arts at Massey and a number of other artists on show have strong Massey connections.