Fruit bats being sold for bush-meat, photographed by Dr Hayman during his study in West Africa. 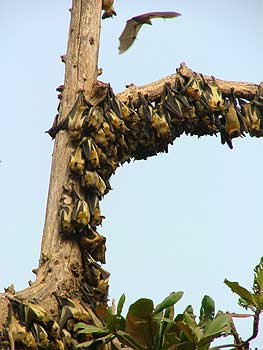 Fruit bats roosting on a tree in West Africa.

As health workers battle to contain the outbreak of Ebola virus in West Africa, a Massey University senior lecturer in veterinary public health is warning against the mass extermination of the bats believed to carry the infection.

Dr David Hayman found evidence of Ebola virus in bats in West Africa during his seven years of studying disease transmission among bats and he is concerned about the ecological and economic consequences of killing the fruit bats suspected of spreading the virus that has claimed over 1000 lives according to the World Health Organization’s latest count.

He says past attempts to stem the spread of rabies by exterminating vampire bat populations did little to stop the virus.

“In the past we’ve just killed off bat populations, but it’s important we don’t take the ill-informed and blunt route of persecuting bats, because they are really important ecologically.

“They do so many unseen things, for example fruit bats eat fruit and then defecate the seeds elsewhere to help reforestation and bats perform a vital role protecting crops by killing pests. Bats even pollinate the blue agave plant that gives us tequila in the Americas,” Dr Hayman says.

The economic value of bats has been brought to light by the fungal infection that has wiped out more than six million bats in North America since its discovery in 2007. Dr Hayman is involved in soon-to-be-released research into the epidemic that could cost the agricultural industry 3.7 billion dollars a year in pest control alone, according to previously published work in world leading research journal Science.

Dr Hayman says the ban on bush-meat hunting and eating bats in Guinea is a positive step in preventing the spread of Ebola virus but the most urgent priority is stemming its spread from human to human and researching how humans are being infected.

“Unlike viruses like rabies, Ebola can be spread from human to human through close contact and the virus could become more infectious between people by evolving inside an individual. That’s a fearful part of Ebola.”

The good news for West Africans is Dr Hayman’s research shows the Ebola virus was found in forest dwelling bats and not the massive populations of urban dwelling bats.

He believes deforestation, encroachment and bush-meat hunting of bats and possibly primates, are the main contributors to the current Ebola virus outbreaks across Africa.

“Ebola is a virus that is like measles or seasonal influenza for bats. It doesn’t seem to cause much harm in bat populations, but when it gets into humans or gorillas it is deadly and causes up to 90% mortality. It leads to fever, vomiting, organ failure and sometimes unstoppable bleeding. Though there are vaccines in development, there is currently no cure for the virus, which can be transmitted to humans through contact with another’s blood, faeces or other bodily fluids,” Dr Hayman says.

Massey delivering online learning to help Liberia battle emerging infectious diseases
Opinion: Why we should care about what happens in DR Congo
Ebola linked to habitat destruction
Mapping the risk of another Ebola outbreak