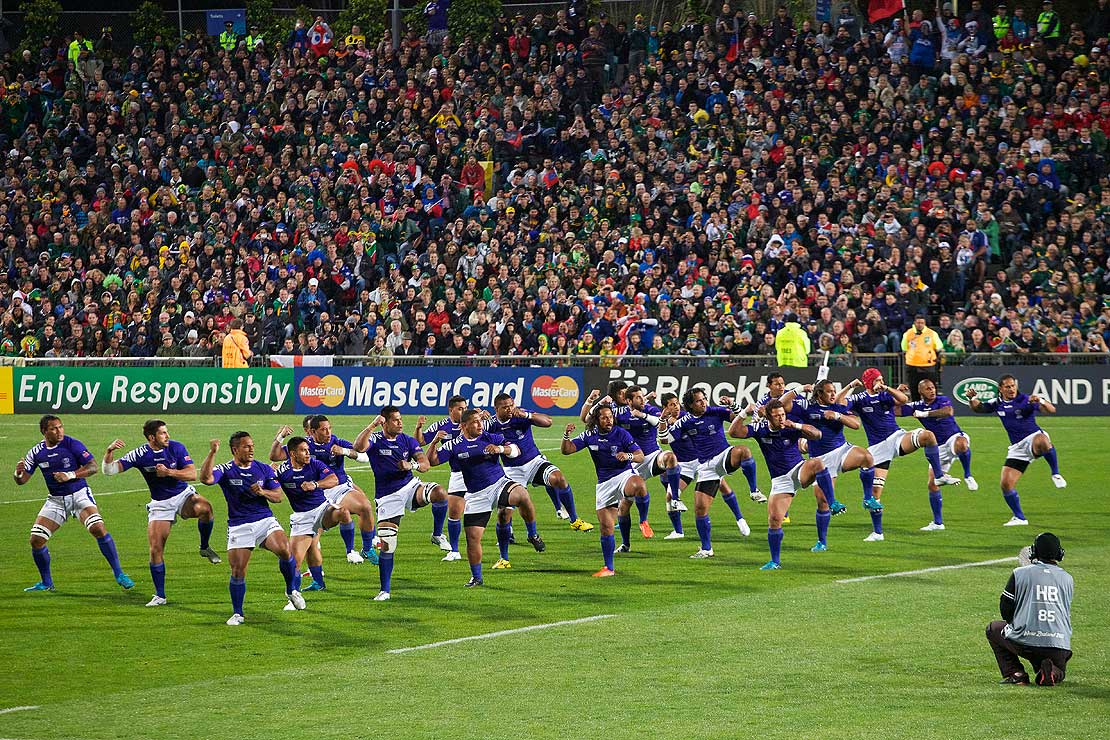 Research explores winning off the rugby field in Samoa Dr Rochelle Stewart-Withers with Koli Sewabu, a former professional Fijian rugby
player, at the launch of the Pacific Research and Policy Centre, where they
presented findings from their research into the value of sport-generated remittances.

As much as NZD $21 million is sent back back to the Pacific Islands annually by Pasifika athletes now resident in New Zealand and other parts of the world, a study investigating the value of sport-generated remittances has found.

As an extension to the notion that sport can bring about economic gains for communities, Dr Rochelle Stewart-Withers is visiting Samoa for the inaugural All Black versus Manu Samoa Test match to be held at Apia to explore some of the further economic and social spin-offs of this unique event.

Semi-professional and professional sports people, including elite rugby players, send the money back to support wider family from places including New Zealand, Australia, France and Japan.

A feasibility study commissioned by the Ministry of Foreign Affairs and Trade Aid Division, undertaken by Dr Stewart-Withers, a lecturer in the School of People, Environment and Planning, with Massey University colleagues, showed the money sent back to their home islands by Pasifika athletes represented about five per cent of all remittances.

Dr Stewart-Withers calculated the value of remittances for Samoa in 2012 with colleague Dr Sam Richardson (from the School of Economics and Finance) and Master of Business Studies graduate and former Fijian Professional rugby player Koli Sewabu. They found Samoan migrants based in other countries contributed US$128 million (about NZD$188 million). This amounts to more than 23 per cent of Samoa’s Gross Domestic Product, with athletes contributing a significant proportion.

When all the Pacific Islands are factored on a per capita basis, athletes send between 6.8 to 13.6 times more money back to the islands than migrants in other jobs, she says.

“When you couple this with the fact the demand for Pacific Island rugby athletes is also growing, the potential is huge.”

At present some of the benefits appear to only be short-term with further research required to determine how to make the opportunities afforded by remittances more sustainable. This was especially important given the relaxation of rules allowing more Pasifika players to play in Europe, and in particular the lucrative French rugby club scene, she says.

“Despite this opportunity, high earnings and large amounts being sent home to families, communities and players do not seem to benefit as much as they could long term, impacts are not sustainable as they should be.”

A three-year pilot programme has been proposed in Fiji aimed at supporting professional and semi-professional rugby players’ to access financial literacy, business development support and management training to help them and their families and wider communities make the most of money being sent back from overseas.

“The initial intention will be to target existing and new professional and semi-professional Fijian rugby players and their families and wider communities, with plans to progress this into other countries, including Samoa and Tonga with additional funding and, all going well, looking wider afield to other sport- labour migrants and indeed non-sport labour migrants,” Dr Stewart-Withers says.

In the meantime she is interested in the timing of the All Blacks visit to Apia and what impact it may have at the grassroots level of the game in Samoa. Beyond that she will also be keenly observing the benefits derived for the hospitality trade as well as market stall owners, and whether tourists make more than just a flying visit to experience Samoa away from Apia.

“In taking a critical view maybe the positive spinoffs won’t be about the economic gains so much – it might instead be about less tangible but just as valuable things such as goodwill, pride, the relationship between New Zealand and Samoa which values the historical and contemporary connections with trade, aid, labour migration and sport,” she says.

“The focus of our research is really about understanding who wins and in what ways, beyond the game.”