The quest is on for the best New Zealand quotes of 2020, and Massey University is calling on the public to help find them. From elections to lockdowns, there have been plenty of life-altering events to give rise to memorable one-liners.

“If there’s a phrase or sentence that stayed in your mind throughout the year, we’d love to hear from you,” competition organiser, Dr Heather Kavan says.

The competition is now in its tenth year. Throughout this time, the public have drawn on diverse sources to find the quotes. “We’ve received quotes from speeches, news interviews, social media, stand-up comedy, advertisements, television, and movies.”

How will the quotes be judged?

We’re calling on the public for nominations and then the university’s judging panel select the top ten, which then go to the public vote. Dr Kavan says that the public often prefer different quotes to the ones experts choose. “We tend to look for variety because some voters like deep and meaningful quotes, while others scan the list for the funniest quote.

“A really good quote is usually one that people like irrespective of whether they agree with the speaker’s viewpoint.

“Unscripted quotes usually do well, especially blunders. Speakers can spend years honing their command of language only to find that people prefer their mistakes to their eloquence,” she says.

All types of quotes are welcome. “The words can be rousing, tragic, beautiful, controversial, hilarious, unexpected, or even embarrassing.”

First, check that the quote was said or written by a New Zealander or a person living in New Zealand this year.

Nominate the quote here. Nominations close at midnight on November 30. We will publicise the top ten in early December and you can vote for your favourite. The winner will be announced during the week of 21 December. 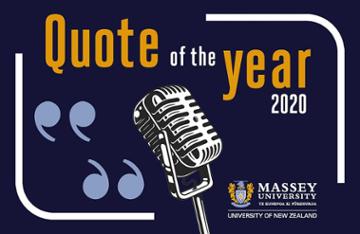 Nominations begin for Quote of the Year 2020

Massey University Quote of the Year is back for 2020 and we're calling on the public to nominate this year's best. 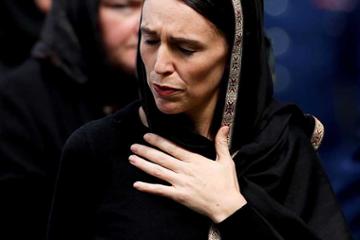 Prime Minister Jacinda Ardern's unifying phrase "They are us", uttered several times in the aftermath of the Christchurch mosque shootings, has taken out the 2019 Massey University Quote of the Year. In a surprise result, Kiwis have voted a slip of the tongue by Leader of the Opposition Simon Bridges as 2018's best quote. New Zealand's favourite soap has thrown up many memorable lines over its 25 years, but 2017 is the first time Shortland Street has won Massey's Quote of the Year.

Quote of the Year past winners

Quote of the Year 2020 "These tears are not for you"
Sara Qasem's quote in her victim impact statement at the sentencing of the Christchurch Mosque shooter has been voted Quote of the Year.

‘They are us’ voted New Zealand’s quote of 2019
Prime Minister Jacinda Ardern's unifying phrase "They are us", uttered several times in the aftermath of the Christchurch mosque shootings, has taken...