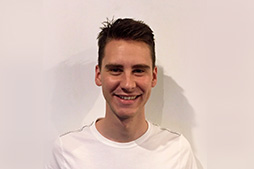 Robert was born in Tauranga (Ngāi Te Rangi descent), completed his schooling in Rotorua then moved to Auckland for his undergraduate studies. He completed an honours degree (first class) in 2015, became a registered pharmacist then began his PhD in 2017. Robert believes strongly in the importance of health research for the national economy and for society: the obvious benefit of improved health outcomes and longevity for the individual and an increase in the productivity of the population generally.

His research will investigate the integration of pharmacists into general practice in New Zealand, and the influence this has on patient care. Internationally, pharmacists are progressively becoming integrated into the general practice team, resulting in improved medication, health and economic outcomes. This research has the potential to contribute towards the aims outlined by the NZ Ministry of Health for a reduction in health inequities for Māori and Pacific peoples, an enhanced, more collaborative working relationship between health professionals and a healthier society generally.

Through his research, Robert also hopes to gain an understanding of the differences in health care systems internationally.

Outside of research, Robert enjoys spending time with friends and family, playing and following basketball, and travelling and experiencing different cultures around the world.

Beyond the PhD, Robert hopes to pursue a career in academia, or health care policy at a national level.