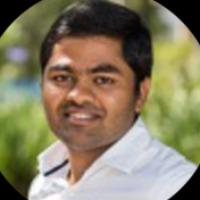 Dr Thota is currently working as a research officer in the Riddet CoRE under Platform 3, Metabolism and Nutrition. His current work involves development and validation of a novel ranking criteria, GlucoTRIG, for the healthiness of foods and meals. He is also investigating novel formulations with anti-inflammatory dietary bio-actives for alleviating chronic diseases such as diabetes, cardiovascular disease and Alzheimer’s.

Prior to joining the Riddet Institute, Rohith received his PhD in Pharmacy from the University of Newcastle in July 2018. During his PhD, he developed a novel predictor of Insulin resistance and type 2 diabetes, InsuTAG®. He also conducted clinical trials with diet-derived bio-active compounds, curcumin and long-chain omega-3 fatty acids, for preventing or delaying the onset of type 2 diabetes. He was supported by prestigious Neville Eric Samson Scholarship and University of Newcastle Postgraduate Research Scholarship during his candidature. During his PhD, he won multiple awards for his publications and for innovation of InsuTAG®. He attended Kakatiya University (India), where he graduated with a Master of Pharmacy (Pharmacology) in 2014 and Bachelor of Pharmacy (Rajiv Gandhi University of Health Sciences, India) in 2011. He conducted pre-clinical experiments with a novel polyphenol formulation for the management of metabolic syndrome and also worked at a pharmaceutical company where he was involved in research and development of oral and nasal over the counter formulations.