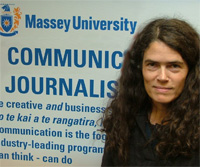 The April anniversary of the Columbine High School massacre will be remembered vividly by a former student of Massey University’s School of Journalism who was part of the newspaper team that won a Pulitzer Prize for its breaking news coverage of the tragedy.

Alison McCulloch won newspapers’ highest accolade for coverage of the 1999 Columbine High School shootings when working as a copy editor at the Denver Post.

America’s Pulitzer Prizes were begun by 19th century newspaper magnate Joseph Pulitzer "as an incentive to excellence". Rewarding works in journalism, letters, and music, they are regarded as being among the most prestigious honours possible in literature: past winners range from Ernest Hemingway to John Kennedy.

In the tragedy of April 20, 1999, Eric Harris and Dylan Klebold murdered 12 of their classmates as well as a teacher, and wounded more than 20 others. The winning Denver Post coverage began with the dramatic breaking news: "Two students, cloaked in black trench coats and armed with guns and bombs, opened fire Tuesday at Columbine High School, killing as many as 25 people and wounding at least 22 others in the worst school shooting in U.S. history."

Alison is quick to emphasise the award was for a writing team. "It was not to me personally. Yeah, I got a plaque, but I was merely one of the many editors involved."

A graduate of the School’s class of 1982 when it was part of the old Wellington Polytechnic, Alison has had a distinguished career in journalism. After graduating alongside home-grown notables including television personality Kerre Woodham and Investigate magazine editor Ian Wishart, she began real life as a rural reporter for Radio New Zealand.

She subsequently worked as a reporter and Gallery reporter for The Dominion newspaper, where she covered the first Maori challenges over fisheries and other resources that began when the Labour government started its state-owned enterprises policy.

In 1990 she joined the new Rainbow Warrior on its trip to Mururoa investigating and protesting French nuclear testing, her reports carried in The Dominion and the New Zealand Listener. On moving to Washington State, she completed an MA in philosophy. After moving to Denver she started a PhD, which she completed in New York in 2003. "It’s about Kant," Alison says. "Not at all journalism related, but I love philosophy, and I’m still trying to work out a way to combine the two. There has to be a way, don’t you think?"