The Massey Journalism programme enjoys a close working relationship with the country’s leading newspapers, news websites, radio stations and television stations. Wellington’s Dominion Post newspaper, for instance, has hired many of our graduates, hosts our students on work experience and funds prizes, such as the Alex Veysey Memorial Prize, for our top students.

Please scroll down the page to see information on all the prizes and scholarships. If you want to go straight to one in particular, click here:

Each year news media organisation Fairfax awards a prize of $1000 to the top student on the Massey Journalism course. The prize goes to the student who achieves the highest overall marks for the papers that comprise the Postgraduate Diploma in Journalism.

Prize winners have gone on to great careers in journalism, including working for some of the top papers in New Zealand.

The winners of the Massey Top Student Award: 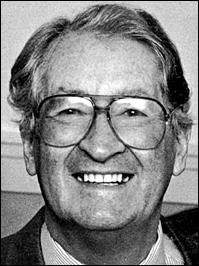 Each year, The Dominion Post newspaper awards a $500 prize to the Massey Postgraduate Diploma in Journalism student who most lives up to the traditional journalistic values of legendary Wellington journalist, the late Alex Veysey (1927-2002). Alex was old school. A careful and hard-working journalist, he had a deep appreciation of life and culture. In many ways, he epitomised the sophistication required of today's journalists. He was able to move easily in any company, had the intellect and drive to penetrate the most complex stories, and wrote eloquently.

The winner is selected by the postgraduate journalism students themselves. They vote for the member of the class who best encapsulates Alex’s love of life and solid journalistic values. Brian F. O’Brien and the magazine he published for 30 years, Sports Digest.

An annual prize of $1000 is awarded to the Postgraduate Diploma in Journalism student who produces the best sports stories, judged from a portfolio of their up to five best stories. The prize is judged by a leading sports journalist at the invitation of the Massey Journalism staff.

The prize, funded by Dennis O’Brien, is a tribute to his late father, journalist and publisher Brian F. O’Brien (1922-1982).

Brian was a key figure in New Zealand sports journalism for decades, renowned particularly for his publication Sports Digest, a must-read for generations of sports fans from its start in 1949 till ill-health forced its founder’s retirement in 1979. Many of New Zealand’s greatest sports journalists appeared in its pages.

Brian was a Commonwealth Games boxing judge and wrote what is still the only complete history of New Zealand boxing, Kiwis With Gloves On, published in 1960.  He also had a wide and active involvement in both rugby and cricket.

The $200 award goes to the student who produces the best news story about New Zealand agriculture that bridges the interest of both the general audience and the rural community. The award is judged by a panel organised by Peter Burke.

Peter has worked as an agriculture journalist and communications manager for more than 40 years. He has won numerous awards, including three Canon Media Awards. In 1987 he was named the inaugural Agricultural Communicator of the Year. He is a life member of the NZ Guild of Agricultural Journalists and the Science Communicators Association of New Zealand. He has worked in television, radio and print and is a former editor of Radio New Zealand Rurals.

The winners of the Peter Burke Agriculture Journalism Award:

Each year scholarships are made available to Massey journalism students to work for English-language papers in Asia.

The scholarships are funded by the Asia New Zealand Foundation, a non-profit organisation established in 1994 to promote links between New Zealand and Asia.

“The journalists who participate in the internships return to New Zealand better informed about the countries they have worked in, and with contacts they can draw on in future reporting,” she says.

“They often maintain an ongoing interest in Asia, and it’s not unusual to see them return to the region to research stories for publication in the New Zealand media. Collectively, these journalists help demystify Asia to their colleagues and to the general public.” 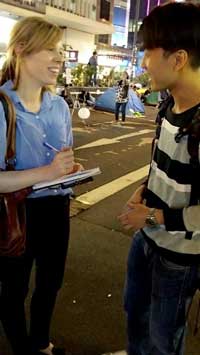 “I found myself interviewing people about universal suffrage, the relationship between Hong Kong and mainland China, and police brutality,” she remembers.

“I have seen insane bamboo barricades being constructed, attended a rally and rushed to the scene when there were rumours of police using tear gas.

“Half the time I had no idea what was actually going on, as most of the speeches and skirmishes were in Cantonese. Sometimes I asked people around me to summarise what was being said, and they were generally happy to oblige. Other times people actually came up to me, offering to help (I have the ‘lost lamb’ look down pat now) or just curious about what I was doing here.”

Here is one of the stories Siobhan filed:  Hong Kong politician likens protestors to African-American slaves 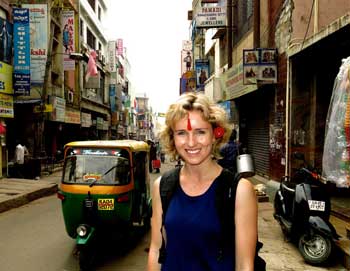 Isobel Ewing was at the Deccan Herald in Bangalore.

“Like India itself, my experience in the Deccan Herald newsroom cannot be encapsulated by one sweeping statement. What could be relied upon to remain constant were the contrasts to home – in editorial decisions, work habits and day-to-day life. Reporters don’t start to trickle into the office until around 2pm, after completing their assignments. They eat together in the cafeteria from 5pm until 6pm, then start seriously working afterwards, often until 11pm.” 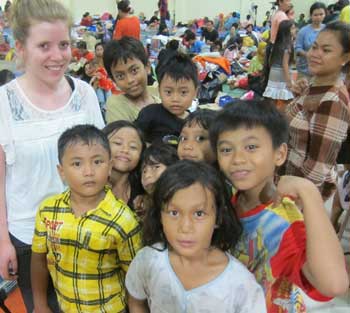 Ashleigh Stewart spent time at an international newspaper while based in the Indonesian capital of Jakarta on an ACICIS scholarship.

The city flooded while she was there, which she reported on for the paper, and a pickpocket stole her iPhone. But she still enjoyed the experience.

“If all else fails,” she says, “find some children to hang out with to bolster the good spirits. Indonesian children (the ones who don’t constantly badger you for money, which is most of the time under instruction from parents concealed out of view anyway) are sincere, always happy and earnestly amused by Westerners. They’ll spend hours speaking to you despite you already telling them you don’t understand, stroking your white skin, and being endlessly fascinated at how you change colour when pinched.

“A trip to a refugee shelter for the floods was transformed into a one-woman show when I – a blonde, intensely white girl – walked through the door. Seriously, one kid punched another just to stand closer to me in a photo.” Aimee Gulliver worked at news website Malaysiakini in Malaysia. During her time there, Malaysian Airlines Flight MH370 disappeared while travelling to Beijing from Kuala Lumpur. Aimee recounts how she covered the story.

“When I turned up at Malaysiakini, I was told it would be difficult for me to be involved in covering the disappearance of MH370, as each media organisation was only allowed two press passes and they already had two reporters who were keen to cover the event.

“Undeterred, I organised for my boss at Fairfax to write a letter supporting my application for press credentials to the Malaysian authorities. I thought I was home and hosed, but hit a further hitch when I was told that Fairfax already had two passes. I realised the Australian Fairfax journalists had beaten me there, but some frantic waving of my passport and explanations saw me issued with my own media pass.

“Each press conference would go for an hour or so, and I would be there for however long it took to file my stories after that.

“In Malaysia, the print media outlets are controlled by the government, whereas Malaysiakini, being an online publication, was not. That meant local papers were quite complimentary about how the authorities were dealing with the investigation into the disappearance of MH370, compared to widespread criticism in the foreign media.

“It was sometimes difficult to remember that 239 people were missing, presumed dead, and that their families were still waiting for news and answers. Though Kuala Lumpur was the centre of the investigation, it was somewhat of a faceless tragedy in that there was nothing to see, compared to a tragedy like a tsunami where you are surrounded by devastation.

“That changed the night the Chinese families turned up in the media room at the hotel to protest the lack of information they had been given. To see their devastation – one woman couldn’t stand she was sobbing so hysterically – was a real eye-opener to how hard it must have been for them.

“I wrote down the main points from each day, just to keep track of the many developments in the search and investigation. It became quite interesting to flick back through my book as the investigation developed – particularly when an entry one day contradicted an entry from a week before, and both were based on information from the Malaysian authorities.”

Here are two of the stories Aimee filed about the plane's disappearance:

From time to time, other scholarship opportunities arise:

Please note: a minimum requirement for eligibility for all prizes and scholarships is that students pass the course.

Details of scholarships and awards available to university students generally.