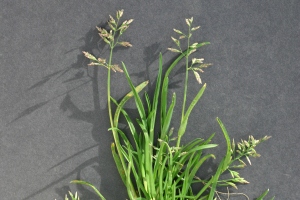 Annual poa has been called by many different names, sometimes referred to by its botanical name Poa annua, or simply poa, or names such as winter grass, annual blue grass and annual meadow grass. It is one of the more common and troublesome weeds in turf of temperate parts of the world, and yet it often isn't readily noticeable. This is because it is a grass itself, and quite a small grass, so it can look just like another turf grass. Because of this, some green-keepers have decided simply to live with it and even encourage it within their turf. But other green-keepers consider it to be a weed because it is very short-term in nature, dying off as soon as the weather becomes a bit dry, or there is too much treading of the turf with sports being played on it. It is quite susceptible to disease so needs regular fungicide spraying in golf greens based on annual poa.  This susceptibility to dying off naturally is a problem because then the ground can be left quite bare, rather than covered in turf. Another problem with annual poa is that it is often a lighter green colour than other turf grasses, making the turf look patchy. It produces lots of short seed-heads as well, which also makes it more noticeable. With high quality turf areas, this patchiness is not desirable. Apart from problems in turf, annual poa is found routinely in gardens, paths and general waste areas. It has been estimated that annual poa seed densities are commonly 200,000 per square metre in infested lawns, which is equivalent to 20 seeds in every square centimetre. This is due to the ability of annual poa to produce seed soon after germinating, and even under tight mowing regimes. As a result, new annual poa seedlings can readily establish if competition from the resident turf species should allow it. This is considered a desirable attribute by those green-keepers who don't mind it growing in their turf. Establishment of new plants can occur at any time of the year, though it is less likely under dry conditions, and annual poa is often found to grow most aggressively in autumn, winter and spring. As is suggested by its name, this weed is usually an annual dying off once it has set seed. The typical life cycle in many parts of New Zealand is to establish in late autumn once rainfall is reliable, and to finish seeding and die off in spring once it starts getting too dry.

However, there is a lot of genetic variation within the species, and there are some biotypes of annual poa that grow in turf which are actually perennials. The perenniality of some plants and the ability to germinate at any time means annual poa will be found in lawns at any time of the year if summer irrigation is sufficient to allow it. 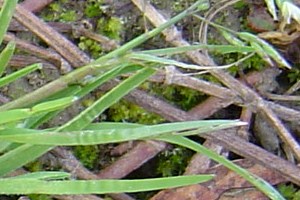 Annual poa will tolerate a wide range of conditions. However it is known to grow more aggressively than desirable turf species under conditions of soil compaction, and prefers good moisture levels in summer. It prefers good levels of nitrogen and phosphate in the soil and is not adversely affected by most mowing heights.

One distinctive characteristic of annual poa can be found at the tip of each leaf blade, which tends to be shaped a bit like the tip of a canoe (see near tip of pen in picture). As mentioned earlier, the colour of the leaves is often a lighter green colour than other turf grasses, almost a yellowish green. The leaves are relatively soft and weak compared with many grass species, and there are often a few crinkles part-way down the leaf (look carefully at the 3rd picture), especially in younger leaves. The leaves have no hairs and are of an average width, ie wider than the fine fescues, usually slightly wider than the bents, about the same as the ryegrasses and narrower than paspalum.

Although many grasses flower only in spring or summer, another characteristic of annual poa is that it can flower at any time of the year, and is often flowering in winter. This is why some people call it winter grass. Even in closely mown lawns, annual poa is able to produce seed heads and return many seeds to the soil ready to start a new generation of plants. 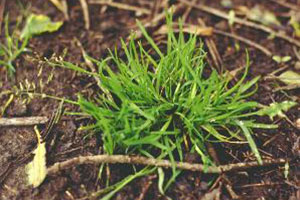 Due to the physiological and morphological similarities between annual poa and most of our temperate turf grass species, there are few herbicide options available to control this weed selectively. Ethofumesate (eg Nortron, Expo 500, Fumate) can be used to kill annual poa in ryegrass turf and also provides some residual protection from further establishment of new seedlings. However this herbicide is expensive and also risky to use in turf containing fine fescues, couch or bent grasses. Pendimethalin is a residual herbicide which can be fairly safely applied over most turf grass species to kill annual poa as it germinates. It only lasts a few weeks however, and so should be applied in autumn when most of the germination is expected to occur. Although herbicides such as dicamba and triclopyr have been observed to cause some damage to annual poa when applied for broad-leaved weed control, annual poa will generally recover.

A growth regulator called paclobutrazol (currently sold in NZ as Gti Shortstop, Avocet and Payback) is now being marketed to help with management of annual poa in turf. However this product is aimed more at discouraging growth of the weed rather than killing it outright.

As there are few herbicide options available for selective control of annual poa in fine turf, good cultural practices tend to be the best way of dealing with annual poa in such conditions. Obviously, even when herbicides can be used, cultural techniques should be part of a management package for the weed. Techniques to relieve soil compaction and aerate the soil will help desirable species compete well with annual poa. Avoid providing more irrigation than is necessary in summer as this may assist annual poa. Likewise only provide as much phosphate as is needed to keep desirable grasses growing actively. Where feasible, keeping the ground covered with a dense sward of the desired turf species throughout the year will stop new seedlings establishing, especially in autumn when germination of new annual poa seedlings will be greatest.

In gardens, paths and waste areas, annual poa is susceptible to most herbicides. However, selective grass herbicides such as fluazifop (Fusilade Forte) can give very poor control of this particular grass. Of this group of herbicides, haloxyfop (eg Gallant Ultra) is the best one to use. Research at Massey University has found a population of annual poa that developed resistance to haloxyfop due to somebody applying haloxyfop for several years in succession, which is a warning to be careful with such practices.  This population was still susceptible to clethodim (eg Centurion Xtra), another selective grass-killer that is effective on annual poa.