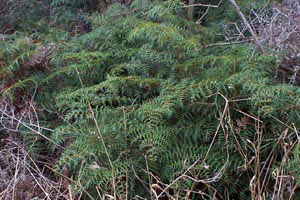 Most of New Zealand’s weeds are from the division of the plant kingdom known as Spermatophyta, which produce seeds. Bracken is from a group of plants (Division) known as Pteridophyta, which reproduce through formation of spores. Many of the plants within Pteridophyta are ferns, as is bracken. In the past few years, taxonomists have changed the family name of bracken from Dennstaedtiaceae, then to Pteridiaceae, and now back again to Dennstaedtiaceae.  Bracken is a troublesome weed throughout the world, though it is thought the type in New Zealand is not as toxic as the bracken from overseas, which is a slightly different species (Pteridium aquilinum). Although stock can eat New Zealand bracken in moderation, they should only be allowed to eat it in spells to prevent them succumbing to the toxic effects. Bracken is carcinogenic and has been linked with cancer in people living and working near large infestations of the weed in countries such as Wales. However the rhizomes of New Zealand’s species were once used as a food by the Maori people.  It causes major problems in forestry, due to competing strongly with young trees and carrying fires. It is also invasive in many hill-country pastures. Being a fern, it obviously looks quite different to most of the other weeds shown on this site, apart perhaps from hemlock which is much less woody. Underground, bracken has a stout rhizome system which is one of the reasons it is so hard to kill. Stems rise from this rhizome in spring and open in a few weeks to form large fronds, which have narrow segments perpendicular to the rib from which they grow. It tends to die back again to it rhizomes for winter, and releases spores in late summer to autumn.  Stems which at first are erect later tend to lean over and may ultimately lower fences to the ground.  Although bracken is the most invasive fern species in New Zealand, a few other species can sometimes cause problems, especially ring fern (Paesia scaberula), which is a smaller species sometimes found in pastures. As mentioned above, the large rhizome system of bracken makes it hard to kill. Despite this, it can be susceptible to cultivation, though generally bracken grows in situations where cultivation is difficult to achieve. Heavy treading by cattle when fronds are emerging can help discourage bracken. Repeated mowing or crushing can severely damage the weed, though once again mowing is not that practical in many hillside situations.  Bracken is generally very difficult to kill with herbicides, though it is susceptible to glyphosate and high rates of metsulfuron. A selective herbicide is also available which will control bracken within pine forests and pastures, namely asulam (Asulox or Dockstar). Hexazinone can also be used for forestry release spraying to remove bracken selectively within pines.