Broad-leaved fleabane is a common weed of waste places and roadsides, but has become more common on farms in New Zealand in recent years. Other botanical names that have been used for this species in the past are Erigeron floribundus, Conyza floribunda and Conyza albida, and it originally comes from South America.  The stems can grow over a metre tall, are not readily eaten by animals and are often seen along fence-lines where they can short out electric fences.  Broad-leaved fleabane can complete its life cycle in a year (an annual) but may take longer under some conditions (to become a biennial).  Its prolific seed production and the reluctance of animals to graze it means it can multiply up rapidly.  However, as the seeds are so small, the seedlings can be easily out-competed if they try to germinate within competitive pasture. Evidently the seeds of this species when crushed release an aroma that can be used to repel fleas, hence its name. 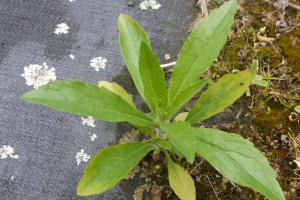 Broad-leaved fleabane starts as a rosette much like the rosette of other weeds such as hawksbeard and shepherd’s purse.  At the rosette stage, it differs from many of these similar species by not having lobes, but rather leaves are a bit like narrow-leaved plantain, though it differs from this species by having teeth along the leaf margins that point toward the apex of the leaf.  The rosette soon begins to bolt, with tall upright stems forming which then branch near the top and produce large numbers of small, greenish seed-heads which release massive numbers of wind-blown seeds.  The seeds are tiny and are attached to short fluffy pappus which allows the seed to blow around in the wind. It doesn’t have yellow flowers like some of the weedy Asteraceae weeds that grow in similar situations.  Very similar weed species are wavy-leaved fleabane (Conyza bonariensis) and Canadian fleabane (Conyza canadensis), though neither tend to be as common in New Zealand as broad-leaved fleabane.  As suggested by its name, wavy-leaved fleabane tends to have leaves which are a bit crinkled, and the tips of the bracts that form the seed-heads often have a purplish tinge.  The flower-heads of Canadian fleabane tend to be slightly smaller than the heads of these other two species, and the bracts that make up the seed-heads are less hairy than in the other two species. Note that just to confuse everybody, there is also another weed species in New Zealand simply known as fleabane (Pulicaria dysenterica) which has yellow flowers and is nothing like these other three species, and generally not as common, yet people often lump the three Conyza species together and just call them fleabane (commonly seen on herbicide labels), which then runs the risk of confusion with this other species. 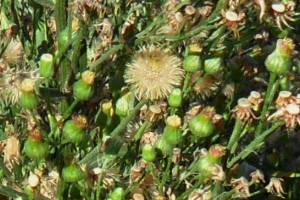 On farms, keeping pastures dense will stop the seedlings establishing.  Once the stems form, animals appear not to like eating it, but mowing will presumably deal with the upright stems, unless they are along fence-lines or in waste areas where mowing isn’t possible.  Glyphosate is effective when plants are young, but it appears to be less effective once the plants are approaching maturity.  There have been problems with resistance developing to the closely related wavy-leaved fleabane in Australia (where it is called flax-leaved fleabane), and there are some concerns broad-leaved fleabane may develop resistance to glyphosate here too if sprayed for too many years in succession.  Broad-leaved fleabane has developed resistance to glyphosate in vineyards and orchards in Europe.  If you think you have broad-leaved fleabane that has resistance to glyphosate following many applications, please contact me as we are looking for examples of this resistance as part of our research into herbicide resistance at Massey University.  If farmers spray under electric fence-lines, this leaves bare soil that is very suitable for this species to establish.  So either add simazine or terbuthylazine to the spray (which remain active in the soil to kill seedlings as they emerge) or don’t spray at all but rather raise the height of the bottom wire so animals will graze the pasture under the fence.  This leaves a competitive pasture to prevent seedling establishment.  Other herbicides that will control this species include a triclopyr/picloram mix (suitable for spot-spraying in pastures) and 2,4-D ester for younger plants (should boom-spraying of pastures be considered necessary).  In orchards, in addition to the use of glyphosate, both glufosinate and amitrole give reasonable control.