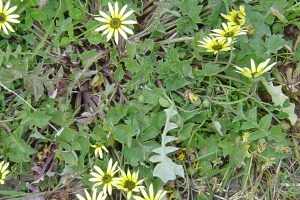 This turf weed is generally considered to be an annual, though it may be a bit longer lived under some New Zealand conditions where the summers aren’t quite as dry as many places where this weed lives. It forms large rosettes in turf which are very noticeable and hence an eye-sore. It was once thought to be a weed of coastal areas, especially in light, sandy soil. However, it copes very happily in the heavy, water-logged soils of Palmerston North, so it would be true to say it copes with a wide range of conditions. Many people incorrectly call this weed Cape daisy.  It usually has a capital “C” as is named after the Cape Province in South Africa from where it originated. Cape weed tends to be much more troublesome in Australia than New Zealand, where it is a major problem in crops and pastures. 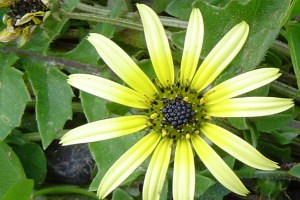 It can be differentiated from many of the other rosette weeds found in turf by the quite jagged, angular lobes, which aren’t as rounded as many of the closely related dandelion-type flat-weeds. The undersides of the leaves are quite pale compared with the upper sides, almost white at times (see picture), and quite hairy. The flower heads are a fairly distinctive colour as well, being about 2-4 cm in diameter, dark purple in the middle with pale yellow ray florets on the outsides, and a deeper yellow at the base of the ray florets (see pictures). Cape weed is still spreading into new areas in some parts of New Zealand. In lawns where Cape weed is just starting to establish, it is important to avoid spreading the seeds more than is necessary. One possible strategy is to mow infested patches last while the Cape weed is flowering then clean the mower before using it again. Cape weed appears to establish best where turf has opened up during drought, so obviously avoiding this from occurring is desirable if possible, eg through use of turf cultivars which tolerate dry conditions. Once Cape weed is present in lawns, it appears to be best controlled by clopyralid (eg Versatill), or herbicides containing dicamba (eg 2,4-D/dicamba mixes) or picloram (eg Victory Gold).  Note that all of these herbicides leave residues in the turf after application so clippings should not be composted for several months afterwards.  If Cape weed is an issue in pastures, usually it is best to focus on keeping pastures dense in autumn to prevent it establishing each year, but it can be removed using MCPA or 2,4-D while rosettes are young.