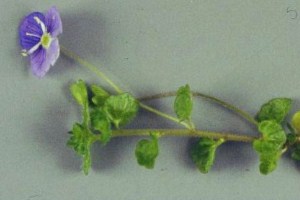 Creeping speedwell was once considered a member of the Scrophulariaceae family but was recently placed into the Plantaginaceae family along with the other speedwells.  It is a major problem in turf wherever it grows. Fortunately it is only found in some parts of New Zealand at present, especially Palmerston North and Auckland. However, it is slowly spreading throughout the country. Creeping speedwell is a perennial weed which forms stolons. These allow thick mats of the weed to form in turf, and the small size of the weed allows it to easily escape being mown. It is tolerant of most turf herbicides, and is one of the few weeds to survive applications of triclopyr and picloram (eg Victory Gold). It is thought that creeping speedwell forms no seeds under New Zealand conditions, unlike the other common speedwell species. This is probably why it hasn’t spread further throughout the country yet. It presumably gets moved around in clods of soil on people's footwear and on equipment. 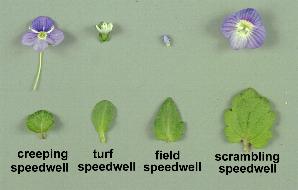 The herbicides tolerated by creeping speedwell include clopyralid, dicamba, picloram, MCPA and 2,4-D. The best way of controlling creeping speedwell is to apply a mecoprop/ioxynil mixture, which is available as Image. It should be applied in spring or autumn, and usually needs to be reapplied 6 months later to kill off any regrowth. Another possibility is to try diflufenican (eg Quantum) which is now formulated for turf weed control in herbicide mixes such as Bow & Arrow NZ.