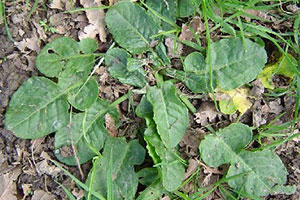 Fiddle dock gets its name from having leaves shaped like a fiddle (or violin). It is a common dock species found throughout New Zealand. It is probably not quite as common as broad-leaved dock within pastures. However, because it tends to be a bit smaller than many of the other dock species, it is better able to tolerate regular mowing and so is usually the main dock species found in turf. Under regular mowing, it grows very flat to the ground and has smaller leaves than in a pasture or waste area situation. Within turf, it never really gets an opportunity to set seed as the seed-head gets removed by the mower before it has developed very far (unless of course the turf is seldom mowed). Fiddle dock is a perennial weed with a tap-root, and grows as a rosette with its leaves radiating out from a central growing point located at ground-level.

As mentioned above, the fiddle-shaped leaves of this species generally make it very distinctive. The picture on the right shows the leaf shape of fiddle dock compared with other common species from the same genus. Clustered dock leaves can sometimes have slight constrictions part way down their length, but usually never as pronounced as in fiddle dock.  The seed-head of fiddle dock is much like that of broad-leaved dock with winged fruits that have jagged edges, though the branches of the flower stem in fiddle dock tend to be more at right angles to the main stem than with broad-leaved dock.  It starts out green then becomes a reddish brown colour with maturity.

In turf, young fiddle dock plants may be susceptible to a mecoprop + ioxynil + bromoxynil mixture (eg Image) or other herbicide mixtures such as MCPA + mecoprop + dicamba. But once the tap-root system is well established, usually the most effective way of removing fiddle dock from grass turf is to apply a triclopyr + picloram mixture (eg Victory Gold). In pastures, asulam (Asulox) or thifensulfuron (eg Harmony) are the two selective products most commonly used. In orchards, either use Asulox to spot-spray docks, or add fluroxypyr (eg Solstar) to glyphosate to improve the control by the glyphosate.