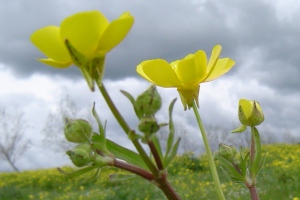 Hairy buttercup is a common species found in dairy pastures throughout the country. It differs from the other two common buttercups found in dairy pastures, creeping buttercup and giant buttercup, in that it is an annual weed species. It tends to establish in autumn in pastures that are not very dense, then grows through winter and flowers in spring before releasing lots of seeds into the soil and dying. It can be a particular problem in pastures that have just been sown in autumn, establishing with the pasture seedlings and making the pasture look a weedy mess over winter and spring. It has been a common component in some of our organic dairy pastures at Massey University, as discussed in this paper on the topic. We have also published a paper looking at the mineral content and feed value of hairy buttercup. Although it does have quite a good mineral content with higher levels of copper and zinc than ryegrass or clover, cows will often avoid eating it because of other chemicals present within the foliage that are mildly poisonous to cattle. Sheep appear to be less affected as they happily eat it. Cows will eat it to some extent but generally prefer to leave it ungrazed. 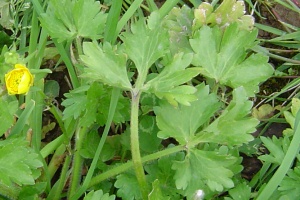 As hairy buttercup needs to reestablish each autumn from seed, keeping pasture dense over this time can prevent a new lot of hairy buttercup establishing. However, sometimes this can be difficult to achieve, especially if establishing a new pasture. The weed can be controlled using MCPB in new pastures, and also in established pastures to remove it while it is a seedling. Likewise, flumetsulam (eg Preside) is often used to control hairy buttercup selectively. Thifensulfuron (eg Harmony) will also remove it from pasture but it tends to be more severe on clovers than MCPB or flumetsulam.  In newly established organic pastures, once the hairy buttercup has flowered and died in late spring, keeping the pasture dense from then on will usually stop it being much of a problem in future, though mowing it as it starts to flower in spring once cows have grazed the paddock can reduce the amount of seed put into the soil.