Hydrocotyle is the common name given for most species from the Hydrocotyle genus. Although there are 15 species listed for this genus in NZ Flora, they can probably be lumped together for a discussion about their biology and control. Few people can actually differentiate between all of them, though I shall make a valiant effort here to differentiate between four of them. In my opinion, there are three really common ones found in turf. There is a hairy one called Hydrocotyle moschata. There is one that has very shiny leaves, called Hydrocotyle heteromeria. This is called waxweed in some books, and has also been incorrectly named as Hydrocotyle americana. The other common one appears to be Hydrocotyle novae-zeelandiae, which is quite a variable species. The fourth species I will deal with here is quite common around Auckland, growing aggressively in lawns there, and is named Hydrocotyle tripartita. It has the common name of Australian hydrocotyle, named after the country from which it originated. The other three species are native to New Zealand. Hydrocotyle is troublesome in turf because it tolerates many of the herbicides used selectively in grass turf. It is typically found in damp, shady environments. All of the hydrocotyle species are perennials with a stolon system (ie creeping, rooting stems). Hydrocotyle can also sometimes cause problems in overgrazed pastures in damp parts of the country, creating low-growing dense mats that exclude most other vegetation. 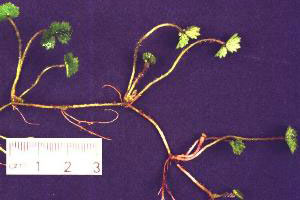 The leaves of the hydrocotyle species are typically about 1 cm in diameter, but can get much smaller than this in very tightly mown bowling greens or golf greens, and can also get considerably larger than this if the plants are left unmown or ungrazed for several weeks or months. One species which does have similar shaped leaves is creeping mallow, which also grows from stolons. However, under similar growing conditions, creeping mallow leaves are usually about five times bigger than hydrocotyle leaves. To tell the four hydrocotyle species apart, it's probably best to look at the side-by-side leaf photos shown on this page. If the leaves are really hairy, it will probably be H. moschata. If the leaves are quite shiny, it's probably H. heteromeria (although the shiny nature of the leaves doesn't show up well in the photo below). If the leaf breaks up into three separate leaflets like a buttercup leaf (but much smaller than buttercup), that's probably H. tripartita. All the rest I tend to classify as H. novae-zeelandiae, though I suspect some of these are probably also from the other hydrocotyle species found within New Zealand. I’m reasonably sure the photo at the top on this page is H. novae-zeelandiae, as this species often seems to have a reddish tinge around the edges of the leaves. Note the small clusters of fruiting bodies (which are green initially then brown) are clearly evident in this photo. The middle photo showing the stolon structure is H. moschata. 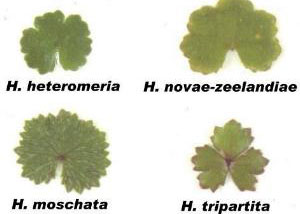 Although it can be a bit tricky telling the various hydrocotyle species apart, it appears they are all very similar to each other when it comes to controlling them, so exact identification is not that important. I have probably over-simplified things by saying that, as I have found with my research that there does appear to be differences between the species in their ability to tolerate dry conditions, and also to tolerate frost. However, I don't have enough evidence to make any broad generalisations on this here. Habitat management may be a way of controlling the aggressiveness of these weeds in turf and pasture. For example, in bowling greens, hydrocotyle is more of a problem when greens are over-watered, and also in any slight depressions that may exist (as water pools in these). So obviously cutting back on irrigation and levelling greens correctly will help. In home gardens, poorly drained lawns in lots of shade will suffer more hydrocotyle problems, so improving drainage and trimming shrubs may help. But generally some assistance from herbicides will be required to reverse bad problems. Many turf herbicides such as MCPA, 2,4-D, mecoprop, ioxynil and dicamba only partially kill well-established hydrocotyle. One of the most effective herbicides for selective control in grass turf is triclopyr. This is sold under such trade names as Grazon, Brushoff and Eliminate, or in garden centres as Yates Hydrocotyle Killer or Kiwicare LawnPro Prickle and Hydrocotyle. It is also sold with picloram as Victory Gold for more broad-spectrum control of other weed species. In cotula bowling greens, bromacil (Hyvar) can be used to kill it, or low rates of triclopyr. In pastures, none of these herbicides can be used without killing the clover component of swards. It is probably best to try reducing over-grazing and increasing competitiveness of the pasture, possibly by over-sowing or resowing the pasture.