"Mallow" is a term used to describe a whole group of species, several of which are quite difficult to tell apart. This page is dedicated to those mallow species from the Malva genus, of which there are four common ones in New Zealand. These are small-flowered mallow (Malva parviflora), dwarf mallow (Malva neglecta), French mallow (Malva nicaeensis) and large-flowered mallow (Malva sylvestris). There are also other mallows that are not quite so similar, such as creeping mallow (Modiola caroliniana) and tree mallow (Malva dendromorpha, formerly Lavatera arborea), but I shan't deal with those here. The mallows are generally described as being short-lived perennials, which means they'll keep growing for a number of years if conditions are OK, but may act as annuals or biennials if conditions aren't quite so good. Animals don't like eating them as they are mildly toxic, but grow mainly in pasture areas with bare soil, such as stock-camps, gate-ways and stock-yards. They are a major problem in lucerne because they are tolerant of most herbicides used there. They are also often found in orchards because of their tolerance of most herbicides used in fruit production. Mallows are also found commonly in waste areas and some arable crops. In horticultural blocks that have relied on fumigation with methyl bromide in the past, they can build up because the seeds are not killed by the fumigation. The four mallow species listed above all look much the same as the pictures on this page. They often grow flat on the ground, about 20-30 cm tall, but can get up to 1 m or so under some conditions. They all have leaves that look like those of geraniums, and the main way to tell the four Malva mallows apart is by the texture of the nutlets that make up the fruits, and also the size of the flowers. A diagram available on-line from the "Flora of New Zealand Volume 4" shows best how to tell them apart, with links beneath the diagrams to a full taxonomic description for each. 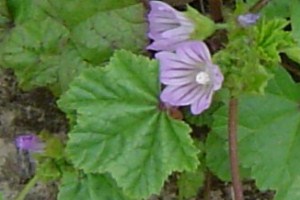 There are no selective herbicides for removing mallows from pastures, though flumetsulam should kill young seedlings and MCPA can have some effect on younger plants. Spot-spraying with a 2,4-D/dicamba mix (eg Banvine) or a triclopyr/picloram mix (eg Victory Gold) should work, though improving pasture competitiveness is the best long-term option. In lucerne, flumetsulam will kill seedlings in establishing lucerne and imazethapyr (eg Spinnaker) is supposed to be quite effective on mallows in lucerne too.  In orchards, both amitrole and glyphosate are weak on mallows, and high rates of glyphosate have been used in the past. Current recommendations now are to either mix oxyfluorfen (eg Goal or Browndown), or carfentrazone (eg Hammer Force), or fluroxypyr (eg Solstar) with glyphosate to improve its effectiveness (though fluroxypyr is only registered for use in apple orchards). Glufosinate (eg Buster) at high rates can also be quite effective on mallows in orchards, especially if formulated with oxyfluorfen (Vixen).