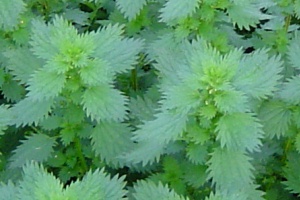 Nettle is an annual weed commonly found in agriculture and horticulture. Most people call it "stinging nettle" because of its well-known characteristic of inflicting a sting to your skin if you should happen to brush past its foliage. The sharp hairs on the foliage inject a number of chemicals into the skin that makes the affected area of your skin feel pain, sensitising the nerves so the feeling is amplified, and also causing swelling around the affected area. If you grab a nettle plant firmly, you may be able to avoid the sting by bending the hairs over before they can penetrate the skin. On farms, nettles are often found in stock camps beside shelter belts as the plants need bare soil to get established from seed and, once germinated, generally won't be grazed by the animals. In horticulture, nettle can tolerate low rates of glyphosate, so the weed is often found in areas such as herbicide strips under orchard trees where glyphosate is frequently used. It will often also be found in gardens where people hand-weeding avoid pulling it out, allowing seeds to be formed. Although generally considered to be a weed, nettle is also claimed to have herbal properties, being used in herbal shampoos and also for homeopathic remedies for burns. It is cooked and used as a vegetable, as heat dissipates the poison. Nettle is an upright plant which seldom grows much taller than 50 cm, and has a distinctive jagged leaf-shape. The other common weed which may be confused with it is nettle-leaved fathen (Chenopodium murale), which is closely related to fathen but has more jagged leaves than fathen. If you're unsure whether a weed is nettle-leaved fathen, you could try touching it to see if you get stung or not, but perhaps looking at the hairs might be better. Nettle has long, stinging hairs, whereas nettle-leaved fathen has no hairs. The flowers and fruits of nettle are greenish and indistinctive, hidden away at the base of the leaves (see middle photo). There are also a number of other nettle species, such as the native tree nettle (Urtica ferox) often found on bush margins. Occasionally you will also find perennial nettle (Urtica dioica), which has an underground rhizome system, grows in clumps, and the floral parts are on much larger stalks and thus more conspicuous than in nettle. Although nettle normally doesn't cause extensive problems in crops, occasionally when there is quite a bit of seed in the soil from poor control in the past, nettle can establish with a new crop to cause problems. You often see this next to where trees once grew in a paddock and thus once nettles grew in stock camps.  It can be controlled in pastures using 2,4-D, and it is also reasonably susceptible to MCPA but not that well controlled by MCPB, especially once it is established. In horticultural crops and gardens, both glyphosate and paraquat are quite weak on nettle, so it's better to use amitrole or glufosinate (eg Buster).  The best control with glufosinate is when it is applied with oxyfluorfen, and this mixture is available commercially as Vixen.  But control by glyphosate can also be improved simply by adding carfentrazone (eg Nail EC, Hammer Force).