Turf weeds that put prickles in your bare feet when you walk across a lawn are never popular, especially in home lawns and recreational areas. Onehunga weed is probably one of the most hated turf weeds in New Zealand for this reason. It is an annual weed which is very small in size, usually fitting beneath the blades of the mower without barely being touched each time the lawn is mowed. It normally acts as a winter annual. This means it spends most of summer as a dormant seed in the soil. It germinates in autumn once the soil becomes moist but before the lawn recovers from summer dryness. If the lawn cover hasn't died back over summer, Onehunga weed seedlings have much more trouble establishing. Once they are established, the plants grow throughout winter then produce clusters of spined fruits near ground level (arrowed in the top picture) ready for some unsuspecting passer-by to step on them and distribute the fruits elsewhere in the lawn in their feet or jandals. Once the lawn begins to dry in summer, the plant dies, having completed its life cycle, though the spiny fruits are often left with spines sticking upwards even though the plant has died. It doesn't always grow as a winter annual though, as it can also establish in spring under some circumstances. It originally comes from South America and is known as lawn burweed in other countries.  It has the name of Onehunga weed in New Zealand as it was first noticed in this suburb of Auckland. Onehunga weed has finely divided leaves, which may get confused with several other weeds found in the lawn. One of these is yarrow, but yarrow is a perennial weed which has a creeping rhizome system underground, whereas Onehunga weed has fairly shallow fibrous root system. Yarrow has many more leaflets per leaf than Onehunga weed. The other main weed which looks like Onehunga weed is soldier’s button (Cotula australis), but this tends to be found more in gardens and paths than in the lawn. Soldier’s button is also an annual, which quite quickly produces noticeable seed-heads in the form of little brown buttons on the end of stalks, unlike the inconspicuous fruits of Onehunga weed. 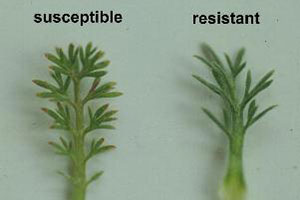 Even though Onehunga weed is only a small annual weed, phenoxy herbicides such as MCPA, 2,4-D and mecoprop do not control this weed very well by themselves. By adding dicamba to any of these herbicides, better control is obtained, eg 2,4-D/dicamba (Banvine), MCPA/mecoprop/dicamba (several trade names).

Probably the most favoured way of commercially controlling this weed in New Zealand turf though is through use of clopyralid (eg Versatill) or a picloram/triclopyr mixture (eg Victory Gold). Note however that we have found a strain of Onehunga weed in several locations north of Auckland that is resistant to both clopyralid and picloram, and this is now being found in other parts of New Zealand as well, such as Mount Maunganui. This is a warning not to rely too heavily on these two herbicides year after year to control Onehunga weed. The resistant strain looks different to the normal Onehunga weed (see picture to the right). If you find you have Onehunga weed which doesn't die after spraying with one of these products, and it has leaves like those shown in the picture, try spraying it with an alternative herbicide before it gets a chance to seed and thus multiply. In more recent research, we showed the resistance to clopyralid is over 200-fold, and there are smaller levels of resistance to MCPA and dicamba.  However, there is no resistance to mecoprop. An MCPA/mecoprop/dicamba mixture has been found to be effective at killing this resistant strain, mainly because mecoprop is the main component in this mixture.

Other herbicides that can be used include a mixture of mecoprop, ioxynil and bromoxynil (eg Image) and  bentazone (eg Basagran). These generally work best under warm conditions but before the plants get too mature. 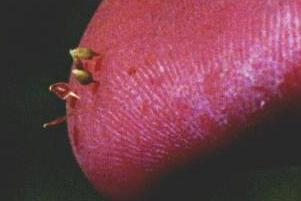 Whatever herbicide is used on the Onehunga weed, obviously it is best to kill the weed before the fruits begin forming, otherwise prickles will still end up in the feet of people walking across the dead plants. But for the long-term management of the weed, it is also useful to stop new seeds being added to the soil each spring so that eventually there will be less seeds from which new plants can establish in autumn.

If you have herbicide-resistant Onehunga weed, we are collating cases and would like to hear from you - please email Kerry Harrington.