Parsley piert is a small weed which grows commonly throughout New Zealand but is often not noticed. Because of its small size, it becomes a problem mainly in turf where it survives low mowing heights. One of its main characteristics is that it tolerates a wide range of herbicides used selectively in turf, so it often only becomes noticeable when it remains alive and healthy in turf after other weeds have been removed by spraying. Although it usually grows as a prostrate weed in turf, in a dense crop it can grow upright, growing 10-20 cm tall. It can cause problems in clover seed crops. It can also be found in pastures, especially newly sown ones, but also sometimes in established pastures where growth is not dense, eg if attacked by grass grub. It tends to grow as a winter annual, establishing in autumn, setting seed in spring or early summer then dying off. 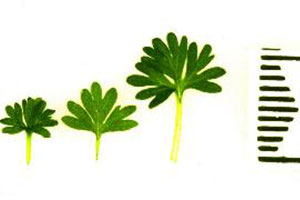 There are several species in New Zealand given the name of parsley piert. The most common one is Aphanes inexspectata, which used to be called Aphanes microcarpa until recently when the taxonomists decided it was time for a name change. The other main one is Aphanes arvensis, but the differences between the two are small and not worth worrying about. Parsley piert plants consist of leaves approximately 4-8 mm long and 4-10 mm wide. Each leaf comprises three leaflets, and each of these leaflets is usually also divided into a number of segments, somewhat like a minute buttercup leaf (see adjacent image). These leaves are joined by short stalks to stems which also tend to be short, often growing to no more than a few centimetres in turf. The stems hug the ground and branch near the base, resulting in the formation of small mats of leaves. These small mats can interfere with the movement of balls on a green. Flowers and fruits of parsley piert are extremely small and inconspicuous, offering no assistance with identification. Although from a distance parsley piert could be confused with Onehunga weed and a few other small-leaved species, a close inspection of the leaf shape is the best way to identify this species as no other species with such small leaves looks the same. Note however that some larger-leaved weeds such as dove's foot and small-flowered buttercup do have vaguely similar leaf shapes. A turf herbicide trial conducted at Massey University a few years ago illustrated the tolerance of this species to herbicides very well. Young parsley piert plants were not affected by MCPA, 2,4-D, MCPA/dicamba, 2,4-D/dicamba, mecoprop, triclopyr (eg Grazon) or clopyralid (eg Versatill). However it was controlled well by a mixture of ioxynil + bromoxynil + mecoprop (eg Image) and a mixture of picloram + triclopyr (eg Victory Gold). Remember that new parsley piert plants establish wherever turf has been thinned out, especially in autumn. Therefore care is required when applying herbicides to ensure the turf does not get damaged removing one lot of parsley piert, as this could lead to further invasion by new seedlings. Both these herbicides can weaken fine turf if not applied carefully.