Ragwort (formerly Senecio jacobaea) is a biennial weed which can cause major problems in pastures. It is most troublesome in pastures grazed only by cattle, such as dairy farms and bull beef units. This is because cattle generally avoid eating the weed, so it can become dominant within the pasture. Ragwort contains a number of poisonous alkaloids, but sheep and goats are less susceptible to the effects of these alkaloids than cattle. So sheep and goats will often eat ragwort, unlike cattle, and thus the weed is less of a problem in grazing systems with either of these animal species present. Although a poisonous weed, animals likely to be affected by the toxins simply refuse to eat it, so animal deaths from eating ragwort are not common. The main problem caused by ragwort is that livestock trying to avoid the weed do not eat the grass and clover growing up through ragwort plants and around them. This leads to poor utilisation of the pasture. As ragwort can be a major problem in dairy pastures once it is established, it has been declared as a noxious weed in most parts of New Zealand for many years, forcing farmers to control it. However, ragwort is so well established throughout New Zealand that many Regional Councils are now putting less emphasis on declaring this a Pest Plant. Generally control is only needed within 20 m of the boundary of the property as ragwort seed has been shown to detach from the wind-blown pappus within 20 m of the parent plant. Ragwort grows as a rosette in its first year of life, and the leaf shape of ragwort is probably unlikely to be confused with many other weeds commonly found in pastures. It is not as finely divided as weeds such as yarrow and stinking mayweed, but generally more finely divided than groundsel, which is seldom found in pasture anyway. Once ragwort flowers, it is very distinctive with its bright yellow flowers noticeable from some distance away. As with many Asteraceae weeds such as the thistles, as it begins to flower, the rosette forms an upright stem which holds the flowers 50-100 cm above the ground. 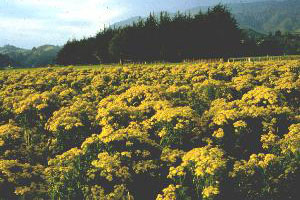 In grazing systems, introduction of sheep or goats to the system will usually stop ragwort from dominating. However, this is often not feasible on dairy farms. Farmers should attempt to keep their pastures dense throughout the year to stop the seeds germinating. Our research has confirmed this is a species which has seeds that germinate best when not shaded by other plants.  Other Massey University work has shown that often germination occurs in winter or early spring following pugging of the soil, and this can be difficult to avoid on a dairy farm. If ragwort is present at high densities, 2,4-D is usually applied while the ragwort is young to give good control. Any plants that do not die can then be spot-sprayed later with chemicals such as 2,4-D/dicamba (eg Banvine), triclopyr/picloram (eg Victory Gold) or metsulfuron (eg Answer). Our research has shown that with these more damaging herbicides, applying them only to the centre of the rosette is as effective as applying the herbicide to the whole rosette, and applying it only to the centre reduces pasture damage. The plants can also be pulled out of the ground. If this is done while at the rosette stage, root fragments left behind will regrow. Generally there is much less regrowth from root fragments left after pulling out a flowering plant. However, some root fragments may regrow even from flowering plants. If the ragwort has started flowering when they are pulled out, the flowers should be removed from the field (perhaps burned) otherwise the seeds can continue to mature even though the plant has been pulled out of the ground. Several biological control agents have been released for ragwort control. The most successful of these is the ragwort flea beetle which appears to be reducing the aggressiveness of ragwort in some areas. The larvae of the cinnabar moth can also defoliate ragwort at some times of the year. AgPest has more about the biology and control of ragwort.