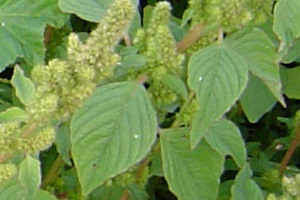 This is a summer annual, dying off with frosts in late autumn. It prefers warmer conditions than many other summer annuals such as fathen, and so is most troublesome in the North Island. It tends to begin germinating later in spring than fathen. It often forms dense stands of upright plants, making it very competitive in infested crops. It has C4 physiology, which is the way it makes sugars from light which is different to temperate (C3) plants.  This makes the weed able to tolerate drier environments than many temperate weeds, and is also the reason for its sensitivity to frosts and why it is only a problem in warmer areas at warmer times of the year. It is sometimes also called Prince of Wales feather, Powell’s amaranth and pigweed.  Because of the time that redroot germinates, it is mainly a weed of maize, but only if herbicides haven’t been used.  It is often also found in orchards over summer, establishing in the bare sprayed strip.  It is native to southwestern USA and northern Mexico. Redroot is a tall, upright plant, and can grow as high as 1 m or more under good conditions. The foliage is usually green, but often has a reddish tinge. The stems can be green or quite pinkish. The flower head is a greenish brown colour and feels quite “prickly” due to the relatively sharp tips of floral structures. These produce large numbers of shiny black seeds. The first true leaf of seedlings has a notch at the tip.  The leaf shape looks a little like a number of our other cropping weeds, such as black nightshade and galinsoga, though the flower parts are very different to both of these.  Redroot is often confused with the closely related prostrate amaranth (Amaranthus deflexus), which is generally an annual or sometimes a short-term perennial species but, as suggested by its name, doesn’t tend to grow as upright as redroot, often clambering across the ground in habitats such as orchards and waste areas.  The seed-head of prostrate amaranth isn’t “prickly” like with redroot.  Another look-alike weed is purple amaranth (Amaranthus lividus), which is semi-upright, generally not as scrambling as prostrate amaranth, and is an annual like redroot, though generally not as aggressive, and all leaves tend to have notches in the leaf tips. 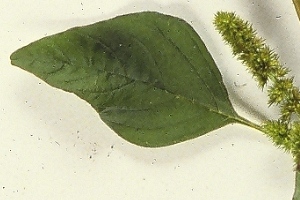 As it is an upright annual, it is susceptible to mowing, and likewise cultivation will control it in cropping situations.  It is also susceptible to most herbicides.  For example, in maize crops, it will be removed by commonly used herbicides such as atrazine, acetochlor, mesotrione and nicosulfuron.  In orchards, glyphosate and glufosinate will control it though well-established plants are not always totally controlled by amitrole.  The seedlings should not be too advanced when sprayed with chlorsulfuron in cereal crops, and in other crops trifluralin will control it for those crop tolerant of this, though clopyralid can be a bit weak on it and ioxynil does not control it.  So it is usually seen either where herbicides haven’t been applied such as around the outside of maize crops, or after the effects of the last herbicide application have worn off such as in orchards and vineyards over summer.