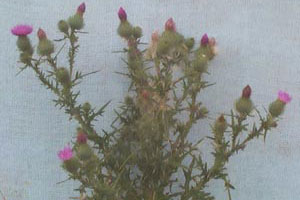 Scotch thistle is a biennial weed, so it depends quite heavily on establishment from seed on a regular basis if it is to be found commonly in any particular situation. In contrast, many pasture weeds are perennials which, once they have germinated, then remain alive for many years afterwards due to vegetative reproduction. However, Scotch thistle (and other biennials like it) does have some capacity to regrow if it is injured (like perennial weeds) by forming multi-rosettes from buds located at the base of each leaf. Scotch thistle is commonly found in pastures, and also in orchards, lawns, waste areas and crops. As a vegetative rosette it can tolerate mowing. However stem elongation ("bolting") occurs when the plant produces flowers, at which time mowers will remove the stem before flowers are formed. Thus although Scotch thistle often establishes in lawns, especially from seed blown in with pappus, it never flowers in lawns. As livestock don’t like eating thistles, it flowers freely in pastures. Seeds normally germinate when competition is low, often when pastures and lawns have been damaged by drought. Flowering usually occurs about 18 months later.  As with most thistles, Scotch thistle decreases animal production by reducing the amount of pasture that livestock are prepared to eat as they avoid eating grass beside the spiny leaves, and also the spiny vegetation and seed pappus can decrease the quality of wool if they get into the fleeces of sheep. 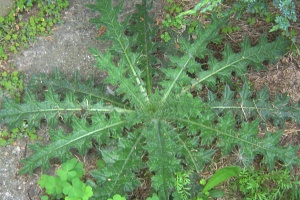 As with most thistles, Scotch thistle has a tap-root. However, it is the only thistle species is New Zealand which has spines on the foliage on the surface of leaves in addition to around the leaf margins (see lower photo). The rest only have spines around the margins. The foliage is a darker green than most other thistle species. The flower head is distinctive, being smaller than heads of nodding thistle (Carduus nutans) and variegated thistle (Silybum marianum), and larger than heads of Californian thistle (Cirsium arvense) and winged thistle (Carduus acanthoides). As with all thistles, seed heads are a collection of florets, and each seed is attached to a pappus which allows it to be blown in the wind.  When growing under good conditions, the flowering plant can get well over 1 m in height and takes up a lot of space in pasture due to its branching growth habit. Scotch thistle is generally quite susceptible to most herbicides compared with some other thistle species, though it is harder to kill as it gets larger. MCPA, 2,4-D and MCPB are all used to selectively control Scotch thistle in pastures. Research we have conducted with spot-spraying of Scotch thistle using herbicides such as metsulfuron or a triclopyr/picloram mixtures which are damaging to the clover component of pastures showed that applying the herbicide only to the centre of each rosette was as effective as spraying the entire rosette, as spraying only the centres would be less likely to damage surrounding pasture.  If "chipping" is attempted (ie using a hoe to separate the foliage from the root), the cut must be made below the crown which has all the dormant buds from the base of leaves. The root will not regrow if these buds are removed.  Seed-heads of Scotch thistle often appear distorted late in the season because of galling activity of a biological control agent, the Scotch thistle gall fly, which can reduce seed production.