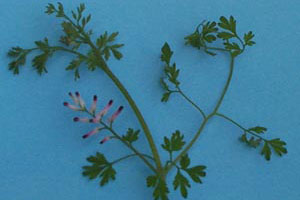 Scrambling fumitory is a clambering annual weed which can grow at any time of the year, though most germination is in spring and autumn. It is commonly found in flower gardens and many crops. It tends not to be as competitive as some larger weed species, though it can smother plants by growing up over them. Under some situations, it can cause "lodging" of crops such as cereals, which results from making the crop "top-heavy" by growing over them, so they fall over in strong winds and thus become difficult to harvest. Although listed for many years as being in the Fumariaceae family, it has recently been reclassified to group it in the Papaveraceae family. 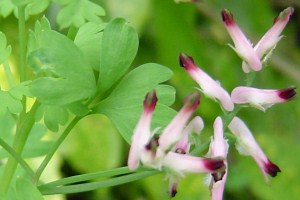 The leaf shape and flowers of this weed are both quite distinctive. Stems tend to be quite weak, unable to support the weight of the plant, thus it creeps along the ground or sprawls over surrounding plants and objects. Leaves are composed of a number of leaflets, as shown in the photo above, though initially as a seedling the first few leaves are made up of three leaflets with narrow long cotyledons (see lower picture). Flowers are conspicuous clusters of about a dozen pink florets, with a distinctive purplish coloration at the end. The pink colour for the major part of each floret is variable, being very pale in some specimens, and quite a deep pink at other times. A very similar species is fumitory (Fumaria officinalis), which usually has 20-40 flowers per cluster, compared with less than 15 in scrambling fumitory. 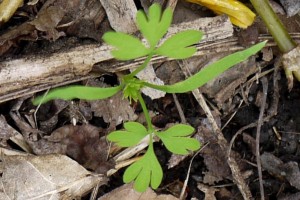 Scrambling fumitory is reasonably susceptible to cultivation and herbicides, though tolerant of 2,4-D and MCPA once it gets older, and is poorly controlled by dicamba, clopyralid, trifluralin, linuron and diuron.