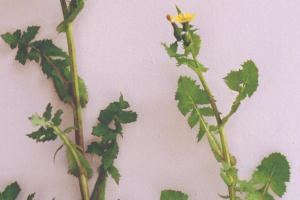 Sow thistle is commonly found in crops, gardens and waste areas. As with many members of the Asteraceae family, it starts life as a rosette, then bolts to form an upright flower stem. Sow thistle is an annual weed which can establish at any time of the year. It is also known as puha, and is eaten by some people as a vegetable. Although known as a food favoured by some Maori people and having an alternative Maori name, it isn’t native to New Zealand, as it comes from Europe.  The original puha eaten by the Maori before colonisation was Sonchus kirkii, but this is now not very common in New Zealand since all of the land changes that have occurred since colonisation by Europeans.  Hence the move to make similar use of this closely related and much more common species.  As sow thistle can grow up to 1 m tall, it can be quite a competitive weed.  It gets its common name from being an attractive food for pigs, and for having a vague similarity in appearance while young to thistles, though doesn’t have spines like true thistles. 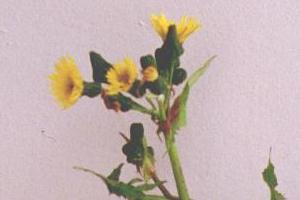 There are no particular control problems with sow thistle, being susceptible to cultivation and most herbicides. It can be a problem in crops that use trifluralin however, as it is resistant to this herbicide.