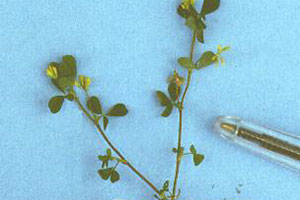 Suckling clover is smaller in size than many of the other clover species found within New Zealand. It is a winter annual, so it mainly germinates in autumn, grows through the winter then flowers in spring, produces its seeds and dies off as the soil dries out in early summer. In many situations, it is not considered troublesome, and in pastures may even be considered useful in producing some high quality feed, albeit not very much due to its small size. However, in turf it is generally an unwanted species, forming mats of vegetation that detract from the uniform grass turf appearance normally required. It is usually a symptom of lawns that dry out over summer, and it will thrive under low mowing heights and where nitrogen fertilisers aren’t applied often since it can fix its own nitrogen. 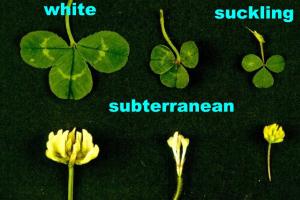 As with all clovers, suckling clover has trifoliate leaves (ie each leaf has three leaflets). They are generally smaller than the leaves of white clover (Trifolium repens) and subterranean clover (Trifolium subterraneum), the other two clovers commonly found in New Zealand turf, and usually don’t have the white crescent markings on the leaflets found in these other two species. However, size isn’t always the best way to tell species apart, as white clover leaves can get very small under some mowing and growing conditions. Both white clover and suckling clover have no hairs on their foliage whereas subterranean clover foliage is hairy. White clover is a perennial species with stolons, so the creeping stem has roots along it holding it to the soil. Suckling clover stems, which are sometimes reddish in colour, do not have these roots. The central leaflet of the suckling clover leaflet is usually on a slightly longer stalk than the other two leaflets, unlike in white or subterranean clovers. However, medicks such as bur medick (Medicago nigra), spotted bur medick (Medicago arabica) and black medick (Medicago lupulina) also have their central leaflet on an even longer stalk than the other two leaflets. When flowering, suckling clover can be differentiated from white and subterranean clovers by having small clusters of yellow florets, whereas florets are white in these other two species. The three medick species mentioned above also have clusters of yellow florets like this, but the leaflets are slightly different in shape and usually much larger than those of suckling clover. As suggested by their names, the bur medicks have prickly burs when they form fruits and black medick has black seed pods, whereas the fruits on suckling clover are fairly small. 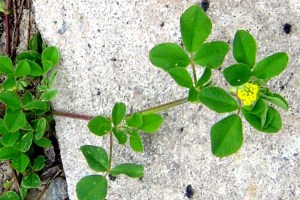 When trying to remove suckling clover from grass turf, herbicides such as clopyralid, dicamba (present in several turf herbicide mixtures) or picloram/triclopyr (eg Victory Gold) are very effective. Note however that care must be taken when composting clippings from lawns treated with herbicides such as clopyralid and picloram as the residues are persistent.  Other herbicides, such as Image (ioxynil + bromoxynil + mecoprop), may have some effect while suckling clover is a seedling, but this species gets surprisingly difficult to control once it is mature. Being an annual, it will die naturally of course once flowering has finished in early summer. Keeping the turf dense and competitive through autumn will help stop new seedlings from establishing.