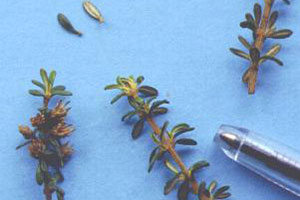 Tauhinu (formerly known as Cassinia leptophylla) is a perennial scrub weed species which is native to New Zealand. It looks similar to manuka, but is not as widespread, causing problems mainly in eastern districts of New Zealand only, from Wairoa down to Otago. As with most scrub weed species, tauhinu is generally a problem in hill country pastures, where it gradually becomes denser in paddocks if good grazing pressure and pasture competition cannot be maintained. Although the correct spelling for this weed is shown above, many farmers incorrectly call it tawhini (pronouncing it as tar-winny). As with manuka, tauhinu is also often grown in people's gardens as an ornamental. Tauhinu has small leaves just like manuka. However, it has several differences to manuka. Manuka leaves tend to have a pointed tip, whereas the leaves of tauhinu are rounded. Also, the underneath of tauhinu leaves are whitish in colour, though often this is not readily evident as the leaves can curl so the underneath is difficult to see. Manuka has colourful pink flowers whereas tauhinu produces seed-heads with lots of fluffy pappus sticking out of them, as do many other Asteraceae weeds, allowing seeds to be blown in the wind. The shrubs grow to about 2 m in height. 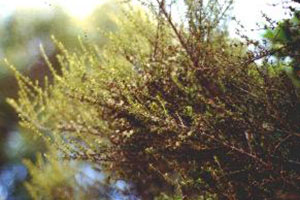 Tauhinu has pliable stems, making it more difficult than some scrub species to flatten using machinery. It is also not particularly susceptible to herbicides, being resistant to glyphosate. However, it can be controlled by metsulfuron (eg Answer, Associate), triclopyr (eg Grazon) and triclopyr/picloram (eg Eliminate Brushkiller).