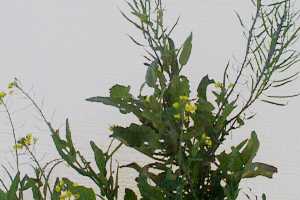 Once it is flowering, wild turnip is a tall, competitive annual weed, capable of causing large reductions in crop yields due to competition for light, nutrients and water. Unlike many of the annual weeds in New Zealand crops which only germinate in spring, this weed can germinate at any time of the year, though most germination occurs either in autumn or spring. Although it is closely related to turnip, it is not welcome in fodder crops because it goes to seed very rapidly, losing feed quality as a result. In brassica crops grown for seed, the possibility of cross-pollination with crop species is also a problem. Because it belongs to the same family as other brassica crops such as cabbages, turnips and choumoellier, this weed is very difficult to control selectively in such crops as it is resistant to the same selective herbicides as the crop. 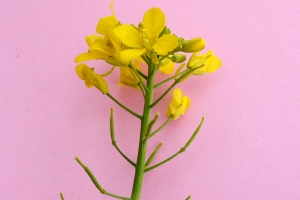 The vegetative stage of wild turnip is a rosette (see lower picture). This means the growing point is at ground level, and leaves radiate out from this growing point. Leaves on the rosette are covered with bristly hairs. When wild turnip flowers, a tall upright flower stem forms, and leaves present near the top of this flower stem are quite smooth, lacking the bristly hairs of rosette leaves. A similar weed, wild radish has bristly leaves over all the flowering plant. Bright yellow flowers form at the ends of the branched stems, and flowers later form pods. Formation of pods is typical of plants in the Brassicaceae family. The root system of wild turnip swells with age, forming a storage organ similar to the crop species turnip, but much smaller than turnips. The positioning of the growing point at ground level during the vegetative stage makes wild turnip less susceptible to mowing, grazing and some forms of cultivation, such as harrowing, than weeds that are upright from an early stage. Although wild turnip is susceptible to many herbicides, those used selectively in brassica crops are ineffective, such as trifluralin, dicamba, picloram, aminopyralid and clopyralid. Within crops other than brassicas where selective herbicides are available to kill it, once plants are older, storage of food reserves in the root system can make the plant less susceptible to control than some other annual weeds. One option for farmers wanting to grow brassica crops in paddocks known to have high wild turnip seed-banks is to grow herbicide-tolerant brassica cultivars as these can be sprayed with chlorsulfuron (Telar) to selectively remove the wild turnip (but of course chlorsulfuron is not safe to be used over normal brassica crops).