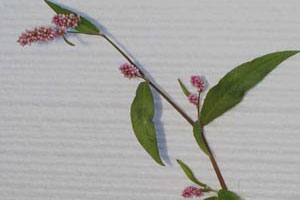 Although when growing in bare areas with few other plants around willow weed will scramble along the ground, it can also grow upright under some conditions such as within crops, becoming competitive with upright weeds such as fathen and black nightshade. Willow weed (which was formerly called Polygonum persicaria) grows well under moist conditions, thriving under the wet conditions often experienced in newly planted crops in spring. Its preference for moist conditions means it grows most aggressively in those parts of the country where summers are not too dry, though it is troublesome throughout New Zealand. Although it likes moist soils, willow weed also needs soil to be well-aerated for optimal growth. It is a summer annual, dying off in late autumn. 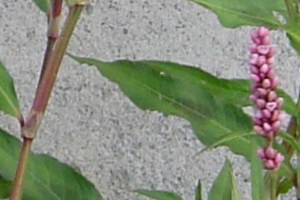 As suggested by its name, the leaves of willow weed are similar in shape to those from willow trees. These leaves usually have a distinctive brown marking in their centre. At the base of each leaf, there is a papery sheath, a common characteristic of weeds in the Polygonaceae family. This is known as the ochrea, and in willow weed it has a little fringe of hairs on it (see lower photo), unlike water pepper mentioned below.  The stems are quite fleshy and, as mentioned above, can either be quite prostrate along the ground or grow fairly upright. Stems often have a reddish tinge, which is why some farmers incorrectly call this weed "redshank." Flowers are pinkish in colour and quite small, but are clustered tightly together in compact cylindrical bunches on the ends of stems. Willow weed is often confused with the closely related water pepper (Persicaria hydropiper), a similar looking weed which is often found in damp pastures, but which has flowers which are much greener than those in willow weed, and are not clustered as tightly into cylindrical bunches as in willow weed.  A very closely related weed is pale willow weed (Persicaria lapathifolia), which looks very similar to willow weed but the seed-head is a paler pink, hence its name, often there is no blotch on the leaf and the ochrea doesn’t have the fringe mentioned above. A weed that doesn’t look that similar but does get confused with willow weed because of its name is tall willow herb (Epilobium ciliatum), which many people mistakenly call willow weed.  The leaf shape is vaguely similar but it grows much more upright and has completely different flowers and fruits with small flowers on the ends of long pods that split open to release wind-blown seeds. 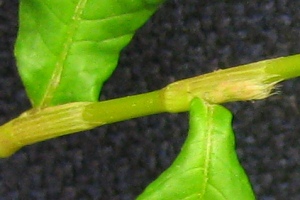 Unlike the tall willow herb which tolerates a number of herbicides such as glyphosate, willow weed is much more straight forward when it comes to control, being susceptible to cultivation and most herbicides.  However, some herbicides such as 2,4-D amine, clopyralid and acetochlor only really suppress willow weed.  In some areas where atrazine has been applied for many years in succession for maize crops, a biotype of willow weed resistant to atrazine and other triazines has developed.  Where this is causing problems, alternative herbicides to control it within maize include mesotrione (eg Callisto), dicamba (eg Banvel) and nicosulfuron (eg Guardian).