The brain has tens of billions of neurons and is one of the most complicated networks that we know. This makes any analysis of brain function hugely time consuming. 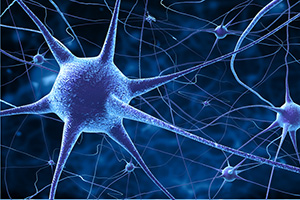 The human brain has tens of billions of neurons, connected by a hugely complicated network of axons. 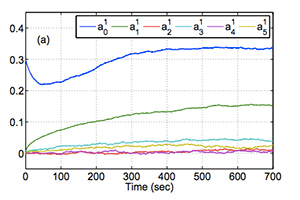 Coefficients of the orthogonal polynomial expansion of the synaptic strengths. Part of the research into equation-free analysis of spike timing dependent plasticity.

Professor Carlo Laing’s research focuses on creating efficient descriptions of networks, like that of neurons in the human brain, to enable quicker analysis and interpretation of these hugely complicated networks.

“It is very difficult to accurately simulate large networks. The work I am doing involves finding ways of mathematically and computationally describing the behaviour of a large network, in this case a network of neurons, using smaller groups of variables or equations.”

There is a high level of interest internationally in simulating the brain’s function.

Professor Laing, based at the Institute of Natural and Mathematical Sciences on Massey’s Auckland campus, is working with a colleague at Princeton University in the US on the phenomenon of spike timing dependent plasticity. This is where the strengths of connections between neurons are modified as a result of the precise “firing” times of individual neurons. This work is published in  Biological Cybernetics.

The subject is topical, with a billion-euro project based out of Switzerland – ‘Blue Brain’ – working to build biologically-detailed digital reconstructions and simulations of the human brain.

“All our efforts in neural networks ultimately feed into global work like this,” says Dr Laing.

Although the focus of much of his work has been in relation to neural networks, the principles can also be applied to other types of networks such as oscillators.

His paper ‘Managing heterogeneity in the study of neural oscillator dynamics’ with Yu Zou , Ben Smith (a summer student at Massey) and Ioannis G Kevrekidis considered a coupled, heterogeneous population of relaxation oscillators and showed how the effects of heterogeneity can be studied in a computationally efficient manner.

Simulations such as these draw from and have applications to a broad range of areas.  Professor Laing’s neural work has implications for biological sciences, but he is using ideas from  other disciplines. For instance, using tools from the field of  uncertainty quantification, an engineering principle and applying them  to networks.

“The sorts of tools we are developing could have application in almost any field. It is about creating a computation tool for simplifying things – for describing or simulating systems that are at first sight complicated, using a smaller number of variables.”