On the 1st December the Centre held its second research colloquium at Massey University. The event was attended by working dog enthusiasts from around New Zealand.

After a short welcome from Andrew Worth we got down to business with a series of talks. The first was from Janelle Wierenga on critical injuries in working dogs. The talked focused on recent publications in the literature on critical and acute injuries in specific working dog sectors during events such as the Haiti earthquake, the Oso landslide and the WTC along with the most common reasons police working dogs present to the emergency department. Common conditions included musculoskeletal injuries, gastrointestinal disease, dehydration and lacerations or wounds. Janelle also covered some specific toxin ingestions and complications related to trauma, serious concerns in most current working dog sectors. We then switched to nutrition with a talk from Nick Cave on the nutritional management on osteoarthritis.

After a quick break to sip coffee and ponder the talks we were back to hear about working dog DNA from Kristene Gedye. Kristen explained that extensive research has been performed on the molecular genetics of dogs worldwide and opportunity exists in New Zealand to utilize these techniques to in working dog research. What is of key importance for any utilization of molecular genetics and DNA is an excellent identification of the trait or disease (the biological question). By looking at working dog DNA we could identify genes which can be selected for and also look at the overall genetic diversity of specific working dog populations, providing an indication of how inbred those dogs may be.

Kristene was followed by Vicki Erceg who gave a thought provoking talk entitled “Why did the dog walk into the MRI and other interesting questions”. She started by presenting recent research from the USA which found that dogs respond to the smell of a familiar person even when that person is not present, suggesting that dogs are capable of remembering us, and that they actually can miss us. Further studies by the group looked at MRI scans when hand signals were given by different people and even by computers and found that the dogs’ responses were different depending on who gave the signal, and that it differed between dogs. Vicki’s talk concluded with evidence showing that dogs were capable of showing episodic-like memory of other’s actions. The dogs studied were able to remember and imitate their owner’s actions when they were unexpectedly requested to imitate the action they had seen previously.  Prior to this study only humans and apes had been shown to remember recent events that were not directly important to them at the time.

Next up were Naomi Cogger and Caeley Thacker with an update on TeamMate a five year observational study of working farm dog. The study is entering its third year and 120 dog owners and more than 500 dogs have been enrolled in the study. Twelve teams of veterinarians and veterinary technicians from Vetlife visit the farm twice a year to collect data, assessed body condition and conduct a full physical examination. The pair reported that at enrolment 28% of dogs had at least one joint with a reduced range of motion and 18% were reported as lame. Further analysis of the data will focus on identifying risk factors for musculoskeletal problems and describing the relationship between body condition score, disease and career duration. The morning session concluded with a talk from Andrew Worth on - what is new in the area of elbow dysplasia.

After a short lunch break participants return for general discussion. There was a great discussion around the need for more research around scent which is particularly important for dogs working for the police, customs and search and rescue. We then moved on to consider how best to communicate our research in the areas of working farm dogs to farmers. The day concluded with afternoon tea and a chance for participants to have a relaxed discussion. 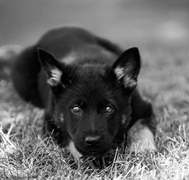 Vicki Erceg has officially been appointed as the National Police Dog Coordinating Veterinarian.
Over the last nearly 20 years, Vicki has worked at Massey University    ...

Researching the effects of nutriceuticals on joint disease in Huntaways
Joint diseases are very common in working farm dogs, with 1 in 4 having  ...

How thin is too thin?
Low body condition, and perceived difficulties putting on weight  ...