Accurately assessing the state of freshwater ecosystem health is crucial to managing freshwaters and any attempted riverine restoration. The contemporary commonly used assessment known as ‘water quality’ is an abstract and outdated concept which has limited value in ecosystem health assessment for a number of reasons: 'water quality' ignores any measure of habitat quality because it is based on snapshots or grab-samples of a limited number of chemical parameters that are known to change hourly, daily and seasonally and does not include any measures of habitat. Dissolved oxygen is a good example of the limitation of water quality measurement, in a degraded river it can go from supersaturated in the afternoon at 140% to 40% twelve hours later. Obviously a one-off measurement of this parameter would give a very poor measure of the true state of a river.

The solution to the failings on conventional water quality measurement, and one recognised by most freshwater management agencies worldwide is the evaluation of the biological status of freshwater ecosystems. The biological communities found at freshwater sites integrate all the chemical and habitat components of ecosystems and thus assessing their status answers all the questions regarding the health and integrity of the site being monitored. Known as biomonitoring it is defined as: the systematic use of biological responses to evaluate changes in the environment.

Development of a predictive bioassessment tool

At the heart of robust bioassessment is the accurate prediction of the biological community that would be expected to be present in the absence of the impacts being assessed. The maps overleaf (figure 1) show an example of the data used in the Waikato region to develop a predictive spatial model of fish distribution. The first shows the c. 2000 sites in the region from the New Zealand freshwater fish database, the next three graphics show the river network in the River Environment Classification. For each numbered reach the catchment proportions of climatic, geological and land-cover data (surrogates for habitat) have been collated and these are matched to each of the sampling sites from the fish database. 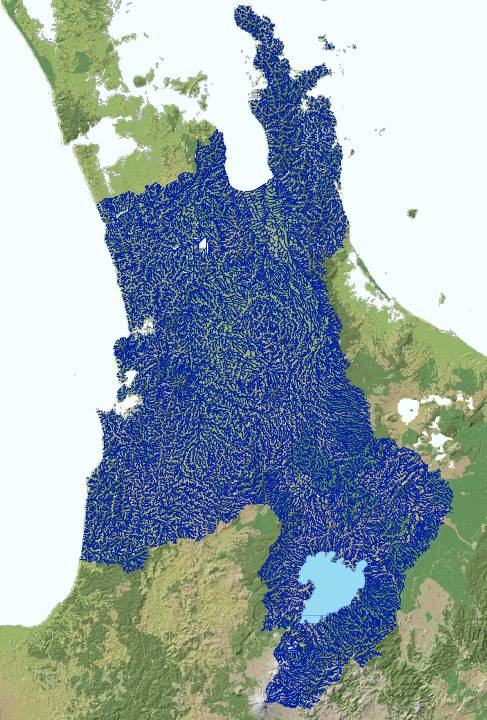 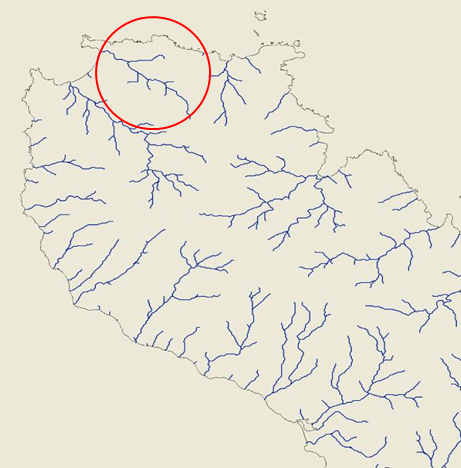 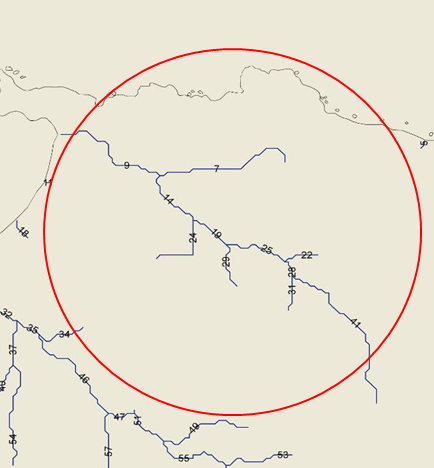 The next stage of the process is to define mathematically the relationship between the habitat and the presence or absence of fish. There are many techniques available to achieve this and many have been employed such as artificial neural networks, regression trees, regressions splines and logistic regression. This process is refined to maximise predictive power and generalisation of models by withholding data using a jack-knife approach or cross-validation. The accuracy of predictive fish models developed in New Zealand are particularly high, due to high quality data and the fact that the distribution of freshwater fish communities are driven primarily by catchment/landscape scale parameters. Figure 2. A sample of the GIS data layers used to define the niches for fish models in the Waikato Region. In this example the proportion of the site catchment slope, rainfall, shade, pastoral land cover, native land cover and temperature were used to define the requirements for banded kokopu.

Once the predictive models are developed calibrated and validated they can then be used to extend the predictions out over the landscape as the habitat data is available for the whole river network. These predictive maps of fish distribution have many uses;

The process of producing a predictive spatial fish map is shown below, again with an example from the Waikato Region. 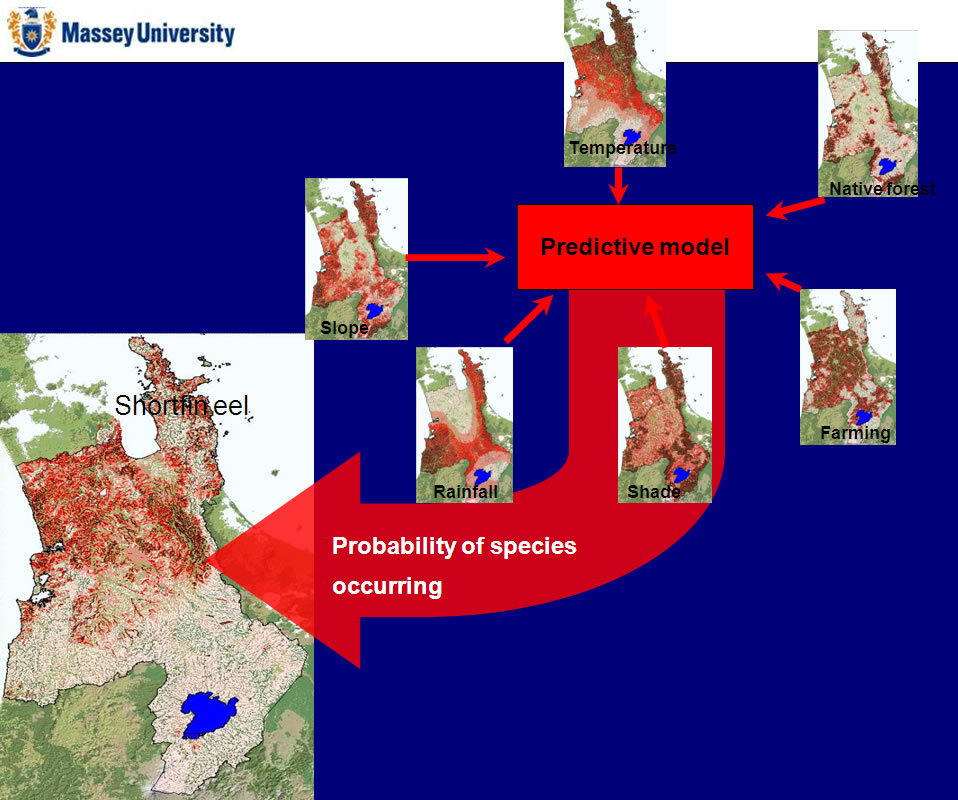 Figure 3. The predictive model for each species is then used to map out its distribution over the entire network, known as a fish map.

The development of bioassessment models from these predictive fish maps requires the prediction of the fish communities expected in the absence of impact. To make these predictions there are two requirements that are difficult to achieve.

The construction of predictive models limited by the use of non human influenced variables limits prediction power and generalisation thus the process is iterative and the outcome is not guaranteed.

A bioassessment tool using fish has been developed for New Zealand and regional models for many North Island regions. The tool uses attributes of fish communities to give them a score that enables a measure of ecosystem health and permits comparison of health within a region and nationally.

The IBI can be combined with predictive maps to give a spatial map of freshwater ecosystem health. The measure using the fish IBI is a measure of the longitudinal connectivity of the river as well as the proximal conditions as can be seen in figure 4 where the many hydro-electricity dams on the river impact on fish communities. This is different to invertebrate indexes or measures as they are less impacted by downstream connectivity. Figure 4. The predicted IBI score for the Waikato Region showing the areas with healthy fish communities in green and grading into low in red.

The predicted fish IBI scores can be combined with the threat rankings of the individual fish species to construct ranking maps showing the waterways with high value fish communities for national assessments (figure 5). 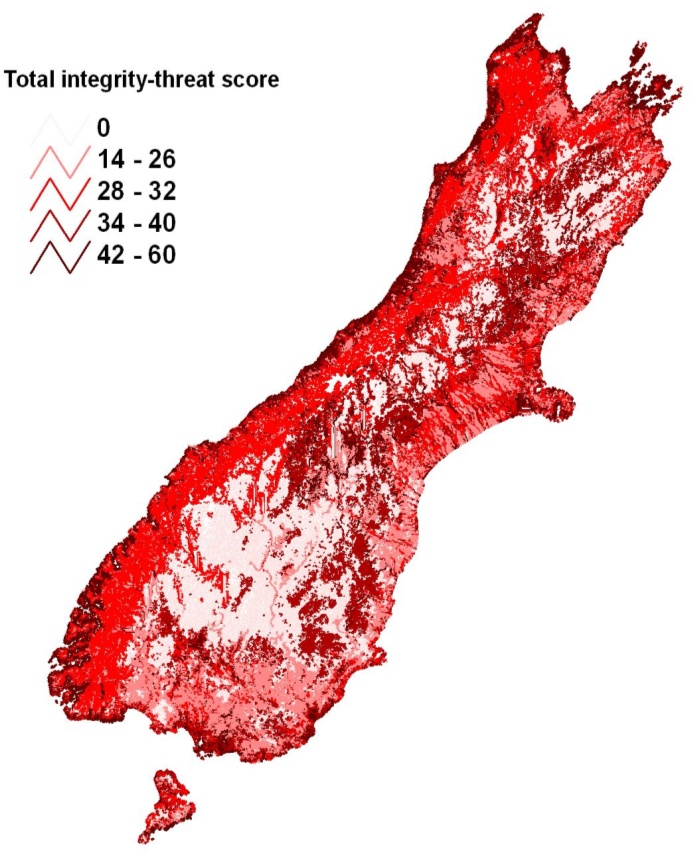 To date assessing the state of flowing waters in New Zealand has been of limited use because of the use of a narrow set of parameters that do not reflect the important ecological factors. The water quality parameters measured are also constrained by the fact that they are one-off – snapshot measurements of factors that are known to vary diurnally, in relation to weather events and rainfall and seasonality. This failing has in part led to the declines in freshwaters seen in New Zealand over the last two decades.

The solution to this failure that has increasingly been recognised globally is bioassessment. A number of tools are described here that have developed to answer this need for a holistic ecosystem level assessment. The examples described are particularly related to using freshwater fish but can also be applied to other components of freshwater biology.