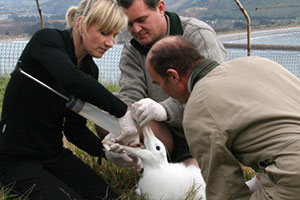 When the weather turns stormy, sea birds battle for their lives against strong winds and rough seas. This often leaves them too weak to fight being blown onto land.

The majority of seabirds Wildbase treat have lost their water proofing, are hungry, emaciated, lethargic and dehydrated. On arrival we do a physical exam, give fluids and warmth. The next day, we x-ray, even when we can't feel any broken bones. We once x-rayed a mollymawk to find a stomach full of bird bones and other material. He later threw up not only bird bones and feathers but a bouncy ball and a balloon still attached to a metre of ribbon. This kind of material can cause obstruction and is deadly to sea birds.

We have found the key to success with pelagic sea birds is to keep their stay with us as short as possible, so often it’s choosing the quickest option that is the most successful.

The yellow-eyed penguin is one of the rarest penguins in the world. They are only found along the south-east South Island and on and around Stewart Island, the Auckland islands and Campbell Island.
They weigh between five and six kilograms and stand about 65cm tall. They inhabit areas of the forest, coastal scrub and sometimes grazed pasture. They can dive to depths of over 100metres.

There are a lot of threats facing this species of penguin including habitat destruction, predation and disease.

Sick or injured penguins are often referred to Wildbase and flown to us to receive specialist care. Deceased birds are sent to the pathology team where they investigate mass mortality events, individual deaths and population disease.

The little blue penguin is the world’s smallest penguin, weighing 800-1000g with a height of 25-30cm. They are found around the southern coast of Australia and the coast of New Zealand. Their conservation status is 'at risk–declining'.

They spend most daylight hours at sea foraging before resting in burrows on land. These are found along the coast between rocks, up slopes and hills and even under houses.

Little blues live in populated areas, so Wildbase will see these birds because of injuries caused by boat strike, predator attacks, and pollution, including oil spills. Many community groups are involved in protecting penguin habitat.