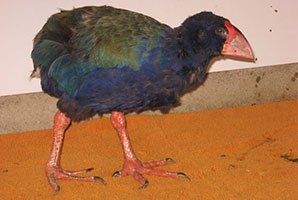 This 14-year old female takahe was sent to the hospital because she was found to be wobbly, weak and very thin. It was also noticed that her legs looked really swollen.

On arrival she was given a physical exam, weighed and given fluids before letting her rest in a warm and quiet cage. The following day she had x-rays taken which showed soft tissue swelling around the hock and pedal joints and older healing fractures to the radius and ulna (wing bones like lower forearm). Samples of blood and fluid were taken, from which we were able to determine that she had a septic polyarthritis which is a bacterial infection in many joints. It was suspected this occurred after she broke her wing, but as takahe don’t fly this wasn’t noticed until we did radiographs.

She needed to be hospitalised over a long period of time. She received injectable pain relief daily as the swollen joints were very painful. She was on a long term course of antibiotics and had her swollen joints flushed while under anaesthetic. Initially this was done daily, then moving to every second day, then weekly as improvement was seen. She was also tube fed a special mixture to help her gain weight and restore her health.

It took two months for her to be free of infection. Her legs will never be the slimmest but she did begin a healthy moult and gain 600 grams of weight while with us – she looked like a new takahe! She was released back onto an off-shore island and as with all takahe she continues to be monitored.