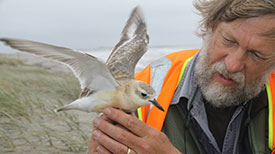 In an effort to prevent dotterels from being impacted by the Rena oil spill, an unusual pre-emptive capture of 60 of the rare birds took place.

The New Zealand dotterel is a threatened species with a total population size of only 1700 individuals and a local population of only 120 birds in the Bay of Plenty.

During the Rena response, 60 NZ dotterels were housed in captivity for 1-3 months and only released when the main risk of oiling had passed. Only four dotterels were externally oiled to the point that washing was required. However, based on the degree of oiling in dotterel habitat we are confident that many more dotterels would have become oiled if they were left to fend for themselves in the contaminated environment.

Intensive beach cleaning activities meant that a total of 54 dotterels were successfully returned to the wild by day 74 of the response.

Pre-emptive capture is a relatively uncommon response option during oil spills and this is particularly true for small shorebirds. The only other example of pre-emptive capture during oil spill response is from the Treasure Oil Spill in South Africa in 2000, where approximately 20 000 African Penguins were evacuated from the spill site and relocated well away from the contaminated area.

Post-release monitoring of dotterels started as soon as the birds were released and will continue until early 2013. Monitoring is focussing on: