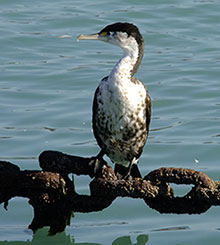 In May 2012, the spillage of around 3 tonnes of light fuel oil in Timaru harbour raised fears for the local shag population. Environment Canterbury were quickly on the job to reduce the environmental impact. Mimouk Hannan, Environment Canterbury’s Oiled Wildlife Representative, describes the wildlife response.

The spill originated from the San Enterprise, a Sanford fishing vessel, following a pipe failure late on the afternoon of Wednesday 2nd May. Fortunately Sanford’s have their own trained oil spill team and together with Environment Canterbury staff, they deployed booms and quickly contained the spill within the harbour. The bulk of the oil was then skimmed off which efficiently dealt with the majority of the spill. A small amount of dispersant was applied to the remaining oil.

The harbour is a popular site for spotted shags and a small number of pied, black and little shags also roost close by. Shags were reported feeding in and near the oiled water so the Oiled Wildlife Response trailer and a wildlife response team was deployed from Christchurch early on Thursday.

Wildlife surveys started on Thursday morning with Carl Diamond heading up a team from Environment Canterbury Timaru. By 11am Carl and team had already surveyed most of the harbour. One oil-spotted shag was caught that day, but with only superficial oil staining, was subsequently released.

A shag and a white-fronted tern were found dead that day, both 100% oiled.

Capture attempts proved very difficult.  White-fronted terns with light staining (and one with a larger patch of oil) were spotted on the first day of wildlife surveys. On Friday, six moderately oiled shags, four with light staining and four lightly oiled red-billed gulls were seen. As they were roosting over open water and in large colonies there was no easy way of catching these birds. Only one shag was caught but again this bird had only light staining and was released.

Surveys continued over the weekend with 3 – 4 moderately oiled shags seen each day. Once again roosting locations meant that none were caught. A final survey was carried out by ornithologist John Dowding and myself on Monday, when we only sighted one pied shag which was moderately oiled and again evaded capture. By this stage the risk of any birds becoming freshly oiled was extremely low so wildlife surveys were discontinued.

In summary a minimum of six shags were moderately oiled to the point it could affect their health and a minimum of nine showed superficial staining and would likely be unaffected. Estimates of maximum numbers of birds affected (i.e. if all sightings were of different individuals) would be 17 moderately oiled and 40 lightly oiled shags. Overall the quick actions of Sanford’s and the Environment Canterbury Timaru team to contain and clean up the spill ensured that the impacts on wildlife were minimised.

The support of the Environment Canterbury Timaru staff to conduct wildlife shoreline surveys was fantastic and meant that the response could be done in a timely and cost effective manner.  Huge sighs of relief were heard from all over the country as those involved in the Rena Wildlife Response realised they were not going to be needed again so soon!